SolForge is an amazing digital card collecting game springing from the collaboration of StoneBlade Entertainmentâ€”formerly Gary Games, the creators of the Ascension Deck Building Game–and Richard Garfield–the original designer of Magic the Gathering (MtG) –that was funded in 2012 through an extremely successful Kickstarter campaign .

(This is really a perfect example of the power of crowdfunding models like Kickstarter, which empower fans of a type of game to enable that gameâ€™s creation outside of the major publication houses.Â  )

The gorgeous artwork and dynamic look of the cards in SolForge help present a world of clashing powers in the form of four rival factions: Alloyin, Nekrium, Tempys, Uterra.
Alloyin is a future tech culture that is most analogous to the White faction in MtG, Nekrium is a death-and-zombie based culture most similar to the Black faction in MtG, Tempys is a magic based culture most similar to a mixture of the Red & Blue factions in MtG, while Uterra is a nature and healing culture most similar to the Green faction of MtG.
While story has never been a huge component of most card based games, games like Magic the Gathering at least have managed to include flavor text on most cards to give you a feel for the world the characters are in. This isn’t really present in SolForge currently.

While the solution to more story could be to add flavor text to the cards, I’m inclined to think that will clutter the card in order to replicate a less than effective system. Instead, I’d love to see them continue to harness the digital power to create either a cinematic or a mini-graphic novel for each of the four cultures. (According to their website, their looking at a â€œCampaignâ€ mode which would give more of a story-based game option which could also permit co-op battles, which I think would be great.) 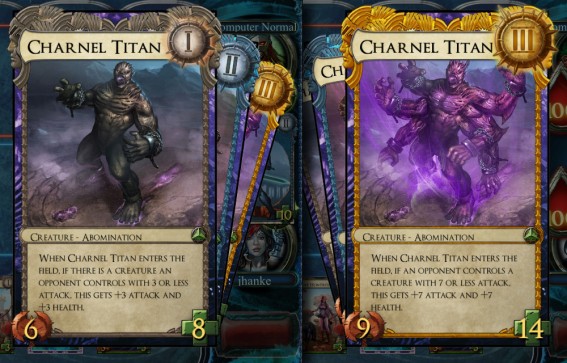 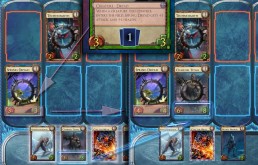 Cards Change Based on What is on the Board 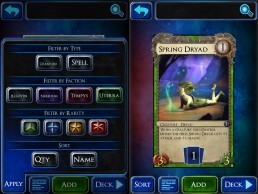 Choose from between 4 different clans to build your deck. 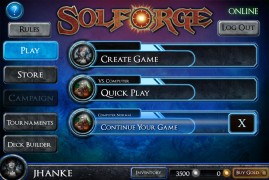 The Main Screen of SolForge 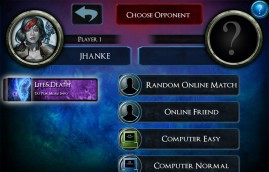 Multiple Battle Options For You To Choose From 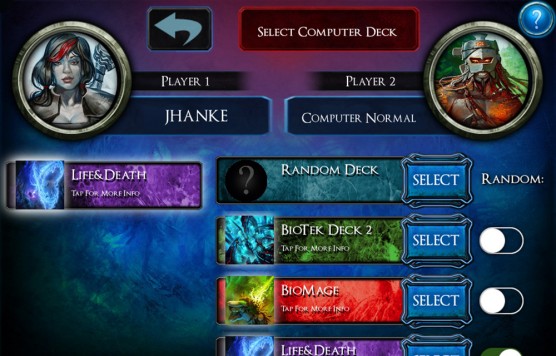 You choose your AI’s deck when locally battling.

The overall card collecting mechanic is similar to MtG, with players starting with a base deck and then the cards of those decks are swapped out with better, more powerful cards that are acquired through booster packs (which are purchased with in-game silver, gold, or as rewards) or through rewarded single player cards.

Unlike MtG, which requires users to gain manna to play cards, SolForge is able to dispense entirely with the need for energy mechanics by simply putting a two card per turn limit. (With the exception being cards that have the word â€œFreeâ€ on themâ€”which are usually upgraded cardsâ€”that can be played without counting toward your two card maximum.)

Each person’s hand consists of five cards and these cards are played across a gameboard consisting of five lanes, which limits moves by players intelligently and ensures the game translates to both tablet and smartphone (currently iOS only, but droid is in beta at the time of this writing). Both players start with 100 health and battle until one of them reaches 0.

What makes SolForge really unique is that each card “levels up” as it is played on the game board, so that future versions of that card are more powerful and deadly. (Somewhat similar to the Evolve ability in MtG, the leveled up creatures in SolForge differ in that they can actually have different abilities, as well as more powerful stats.) This is a great way to utilize the strength of multimedia to give a seamless game mechanic that would be too cumbersome for a physical card game. It augments your strategy tremendously, as you must think of your cards not only in terms of where they are now, but where they will be when they are upgraded. (For example, some cards that are almost throwaway in their initial stages are extremely powerful in their later stages, so you often want to get their weaker versions on the board quickly just to get their upgrades shuffled in as soon as possible.)

To make sure this mechanic has as much effect as possible (and to prevent bogging down of online play by too much pondering by players), after every turn, the three cards not played are put into your discard pile along with the upgraded version of the cards you did play. Every four rounds, your player “levels up” and the discard pile is shuffled back into your play deck. Decks are also restricted to just 30 cards, rather than the minimum of 60 that MtG has, which assures that your leveled up versions are available much sooner..
This free to play game gives some nice rewards to players who want to play without dropping cash, as you can earn silver (the non-premium game currency), cards, and tickets toward tournaments by logging in each day and winning: your first match of the day, your first online match of the day, and your third match of the day.

If you go to the SolForge website, you can find a list of numerous improvements that are on the list for the future. While a lot of these improvements could be really cool, ones that would only appeal to die-hard playersâ€”like buying customized cardsâ€”were nested near ones that are highly important to the gameâ€™s continued adoption by new playersâ€”like having some sort of ranking system for online play. While there are a bunch of new features they have in the pipeline that I canâ€™t wait to test outâ€”like the ability to Forge new cards from excess cards a player doesnâ€™t need or an online auction house to finally trade excess cardsâ€”I know how easy it can be to get so caught up in the flash and bang of a creative project that the things that will actually improve adoption and improve the experience for the long haul might get overlooked.

As such, I wanted to list what I think are the top six improvements that would not only help the game, but actually create more new users that would stay with the system long-term. Since the game is so new in its life cycle (having gone from iPad beta last December to full iOS release, PC beta, and Android beta today), itâ€™s at a really perfect time to focus on some of these things before additions that could make these things more complicatedâ€”or even impossibleâ€”down the road are implemented:

Many of our readers are big role playing and card collecting game enthusiasts, so SolForge should be a natural fit if youâ€™re part of this group. Fans of the darker side of things, will definitely find a lot to enjoy in using the Nekrium in your conquests! (I personally created an amazing deck by combining Uterra and Nekrium cards to create a deck I call The Life & Death deck, which had the ability to poison, create destructive suicide-attacks, and pull off clever resurrection tricks, while also having the power to generate new life, regen life, and buff characters.)

All in all, this is an amazingly great digital card collecting game, which is just out of beta in iOS and still in beta for most of the other options! Hopefully, the ability to fight in weighted online battles and have additional options for earning freemium content will be added in the near future to help ensure an even larger and loyal fan base for something that could be destined to become the ultimate digital card game!