Bigfoot has come to the town of Ellwood City, PA and is causing BIG problems.  The creature kills the friend of two locals and they’re on for revenge.  They team up with a local exterminator and it’s up to them to take him down, without getting killed in the process and having to endure mockery from the rest of the town.

The movie opens with Dale (Nate Magill), Chuck (Curt Wootton), and Daryl (Bill Crawford) driving in a pick-up singing along to a rock song (stereotypical redneck behavior).  They arrive at a barn and pick up a cooler of beer.  Daryl gets attacked by Bigfoot and thus begins Dale and Chuck’s search for the legendary creature and their conflicts with the authorities and townspeople.  The mayor of Ellwood City knows of Bigfoot and intends to keep its capture out of the public eye, and is at ends with the “local drunks.”  The local exterminator, Burl (Jared Show), joins them on their quest and disaster follows these rednecks wherever they go.  Will they be able to exterminate the giant rodent or will Darryl’s fate soon be theirs?

Forget about the Bigfoot you may have seen in Harry and the Hendersons; this creature is not a friend of the family.  The director did a great job of keeping Bigfoot mysterious by not fully exposing the creature till late in the film.  And when (s)he is finally seen, the horrifying appearance matches its behavior.  What could go wrong with a final showdown of three ignorant rednecks and a Sasquatch?  Watch it and find out.

I was surprised to learn that this was Jared Show’s directorial debut, and he also co wrote the script.  This is a great first movie for him and I look forward to future films.  Editing, lighting, and cinematography are all great quality for an independent debut.  There’s also some choreography for a quick dance at a bar that worked really well and added quite a few laughs.

The score and musical selections were a great match for the mood of the film.  Especially for a chase sequence when a young girl is running from Bigfoot.  I’m not particularly a fan of southern music but no other style would have been appropriate.  When rock music wasn’t playing you heard music similar to what is found in 80s and 90s horror/action films.

The actors are not at all amateur.  The main cast (Dale, Chuck and Burl) do a great job with their characters and the personal struggles that conflict with their hunt for Bigfoot (e.g. relationships, egos and kidney stones). The supporting actors were great picks, and Mayor Carl (John E. Lane, Jr.) was the perfect enemy; had a great menacing voice and presence.  You have a couple of creative characters as well.  I mean, the mayor has two Amish bodyguards, how awesome is that? 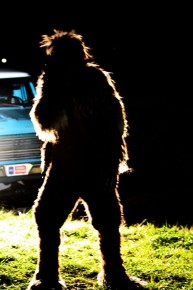 Appearance of the creature 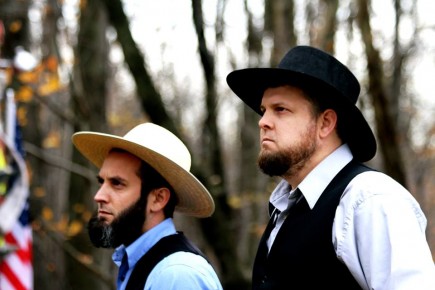 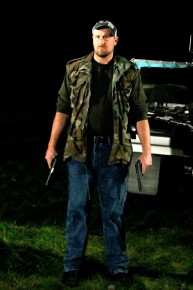 All Goths who are interested in cryptozoology would find this film entertaining.  I’ve come to realize that Bigfoot and other legendary creatures seem to have their place in the Goth scene.  The dark horror aspects of the film would be loved by the community, and if you’re a Goth from the South then that will also add enjoyment to the comedy and claims that you hear from the rednecks.

Bigfoot: The Movie offers big laughs and blood, so Sasq-WATCH this film!