Crimson Peak, the latest movie from Mexican director Guillermo Del Toro (Hellboy, Pan’s Labyrinth, Pacific Rim), is keeping audiences restless with anticipation because though it’s yet to debut in theaters, the buzz so far is quite positive. Advertised as a horror movie, Crimson Peak will be competing with the more youth-focused Goosebumps when it debuts in theaters later this month.  (Interestingly, there aren’t many horror films this October. With Eli Roth’s long delayed “torture-porn” film, The Green Inferno, dropping in September, the only other theatrical release horror film before Thanksgiving’s Victor Frankenstein will be the next Paranormal Activity film, which will be coming out on October 23rd.)

Mia Wasikowska (Jane Eyre) stars as a young American writer, who in the aftermath of a family tragedy, is swept off her feet by a British aristocrat (Tom Hiddleston, Thor) to a creepy new home and an even creepier new sister-in-law (Jessica Chastain, The Martian) who could both be deadly threats.

At the heart of the movie is love – between father and daughter, childhood friends, and siblings.

Set in the Victorian era (like Wasikowska’s 2011 film, Jane Eyre), Crimson Peak explores the complexity of women via its two strong female leads. Where most female leads are usually pieces to look at, Guillermo Del Toro’s leads take on a life of their own; making decisions that influence the course of their lives. These protagonists challenge the way their society look at women; rather than sit around and wait to be rescued, they take action to achieve their desired outcomes.

Guillermo’s trademark compassion for his monsters is evident in Crimson Peak as he takes us on a journey that helps us understand the villains. His love for his deeply human–but damaged–monsters compels us to empathize and almost try to save them. 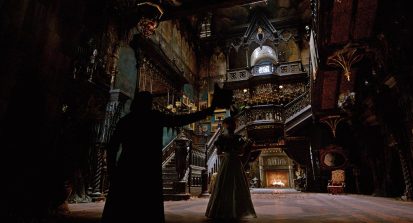 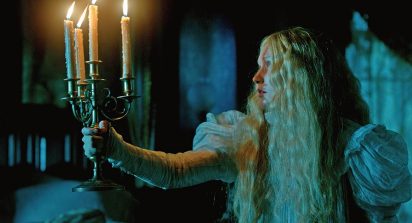 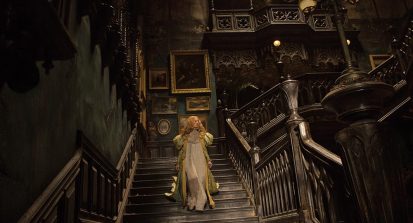 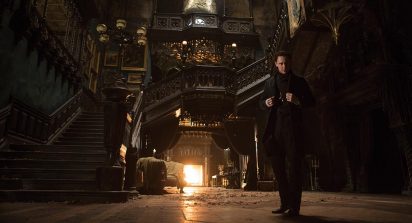 The art, direction, photography, colors, atmosphere and mood are unnerving, captivating and innocent. However, the plot leaves a lot to be desired as its peak could use more of a “hook”, a bigger secret to explain the villain’s natures. If you pay close enough attention, the mystery is easy to guess. But that would only be a letdown if the movie were actually a mystery rather than a gothic romance with some horror. Though the truth at the end is somewhat predictable, it was still satisfyingly shocking and sickening.

The great thing about Crimson Peak is that it is all surprisingly believable because the movie is based on a plot that is simple yet memorable. Its stellar imagery is not only impressive but by far the most enjoyable part of the movie.

Fans expecting a scary Halloween-esque movie that it’s trailer suggests will be disappointed, as Crimson Peak is much more Gothic romance. However, from my perspective, for a Gothic romance movie, it could use more Gothic flavor and nuance, even  though each actor – Mia Wasikowska, Tom Hiddleston and Jessica Chastain – compellingly portrays their character.

With that said, the lush scenery, artistic style of the sets, and the beautiful cinematography by Dan Laustsen are truly an incredible exploration of Gothic imagery.

Though the movie is more creepy than scary, the positive early buzz clarifying things will hopefully help Crimson Peak at the box office. But of course for the time being, we’ll just have to wait and see.

Crimson Peak hits theaters this weekend. For a list of showtimes and to buy tickets online, click here.

Anwuli Okeke is an emerging media specialist who works with Indelible Entertainment PR. She loves house music and African art, and is an avid comic collector of European imports like Obelix & Asterix.