record label, Majik Ninja Entertainment. Taking place in Kokomo, Indiana at Front Row Live, it consisted of two days’ worth of live performances (last year was just one) from all of the artists on the label, including two different headlining sets from the demented duo themselves.  This being my very first large Juggalo-related event I was very curious what was in store.

Fans who were interested had the option of buying a separate ticket to attend the pre-party before the official event.  Of course, I was one of those who decided to check it out as I am a huge fan of Blaze Ya Dead Homie, and he was performing alongside ABK (Anybody Killa) as the headlining group Drive By.  There were also performances by underground artists such as Redd, #BPTF (Bulletproof and the Fool), Ground Zero, and a Native World mash-up.  I hadn’t seen ABK since 2002 and I’d never seen Drive By, so that was definitely a treat. Drive By (LEFT Anybody Killa, RIGHT Blaze Ya Dead Homie)

While I am a fan of everyone on the label I was most looking forward to the newest members of the MNE Family, Alla Xul Elu, or  AXE for short.  They have been an underground horrorcore sensation for many years now, with a loyal fanbase they refer to as Xulligans.  I had only heard of them last year and this was my first time seeing them.  Those guys had the entire crowd hyped during their very theatrical and energetic performance.  I had the pleasure of meeting them over the weekend.  After everything I’ve heard (and seen) I think it’s safe to say they’ve gained a new Xulligan and I look forward to their upcoming release entitled The Almighty. AXE was followed by Gorilla Voltage, one of my favorite rap groups.  They performed a new song that I very much enjoyed.  This is the third time I’ve been able to see them, and each time they have remembered the Reverend!  LARS (Last American Rock Stars) really got the crowd going.  The group consists of rap legends King Gordy and Bizarre.  G-Mo Skee, another MNE favorite, experienced some technical difficulties during his set, but kept the crowd entertained by his amazing freestyle abilities while the problem was being solved.  Boondox, a southern-style rapper and one of the label’s first signed artists, gave a great performance to fans who have been following him since he was originally on Psychopathic Records.  The night ended with an extremely lively set by Twiztid, featuring their live drummer Draven, who is Davey Suicide’s permanent drummer.  After that performance I couldn’t prepare myself for what they had planned the next day.

The second day began with the VIP meet and greet, one of the most memorable parts of the event.  I was very excited to meet all of the artists, especially Twiztid since I’ve been listening to them for almost twenty years.  We’d tweeted back and forth a few times, but now I was finally going to meet them.  When I walked up to them I introduced myself as Reverend Leviathan, and Jamie Madrox said, “I know who you are, mother fucker, I follow Twitter!”  We all laughed and I kept my cool, but deep down inside I was like, “He knows who I am!”  After I’d met all the artists I looked at my pictures and saw that the one with Twiztid was extremely blurry, which dampened my mood a bit.  I ended up running into George Vlahakis, their manager and CEO of MNE.  I showed him the photo and he said, “Oh, I’m sorry.  Don’t worry, man, I’m not gonna let you leave here with a blurry photo.  Follow me.”  He took me back over to them and I got another picture.  I don’t know many managers who’d be willing to do that when you’ve already got almost 300 VIPs trying to meet the artists.  That dude earned a lot of my respect. The meet and greet. Draven (far left) is the drummer of Davey Suicide and he acts as their live drummer.

The R.O.C., one of the most underrated rappers in Detroit’s underground, opened with a powerful set.  It was my first time seeing him live, and he performed a lot of my favorite songs.  He was followed by Lex the Hex Master, another artist that I have a lot of respect for.  He dropped a new mixtape at the event called Shadow King.  I was most excited to see The Underground Avengers (UGA), as they were also recently signed and one of the members is a dear friend of mine.  This was their first performance as an MNE group, and the place was filled from the front of the stage to the end of the bar.  They also dropped their new album Anomaly 88 at AOTN, even though the official release date wasn’t for another week.  Axe Murder Boyz (AMB) performed a lot of their newer stuff from their first release on MNE entitled Muerte, and Blaze Ya Dead Homie gave us a set list that included songs from almost every release he’s ever had. Twiztid’s set on the second day requires its own paragraph, as it was really that epic.  They performed some very oldschool songs, at one point even bringing The R.O.C. onstage and doing some House of Krazees (For those who don’t know, HOK was their first group before they were Twiztid.) .  Then Blaze joined them and performed quite a few songs that he was featured on, and later the entire MNE Family appeared and performed the song “Outlined in Chalk” together.  But nothing could’ve prepared the crowd for what followed.  The lights when out, and when they came back on Twiztid had put on masks and Dark Lotus jerseys and performed a few Dark Lotus songs, ending with the fan favorite “Juggalo Family.”  The energy in that crowd was overwhelming.

You know, Juggalos get a lot of hate and disrespect from other subcultures and people in general, but I have never experienced so much love and inclusion in a group of people before.  In fact, I experienced more love and acceptance from them than I have fellow Goths in the past.  We’re more alike than many people would like to think. 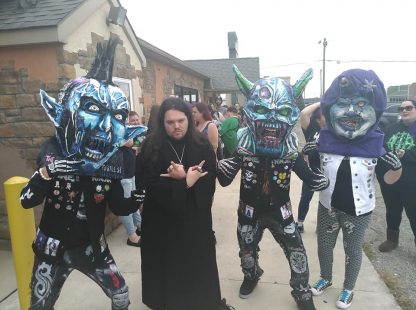 Hanging out with fans 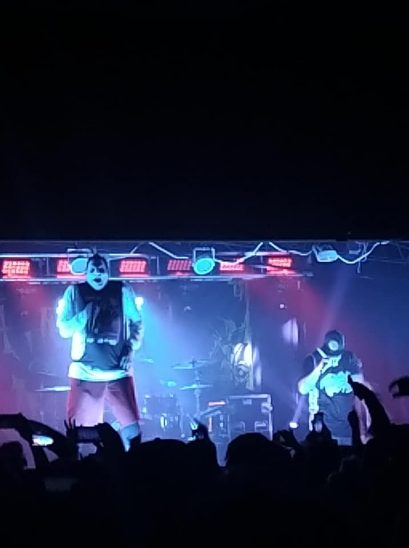 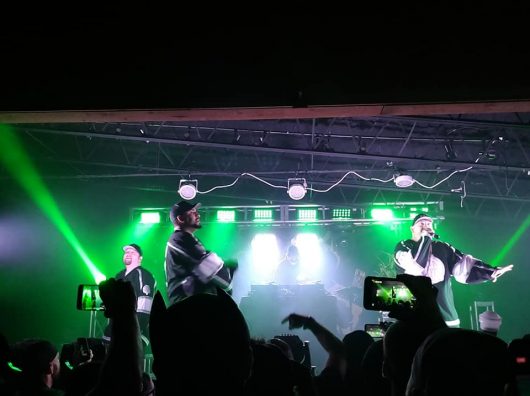 The Underground Avengers (Left to right: Boondox, Claas and Bukshot) 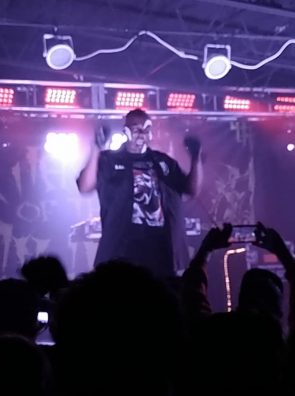 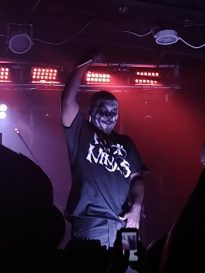 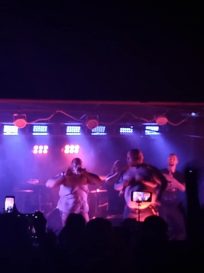 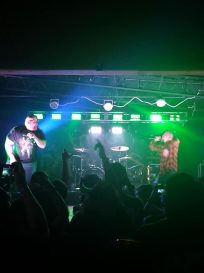 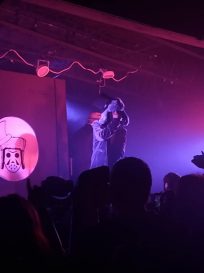 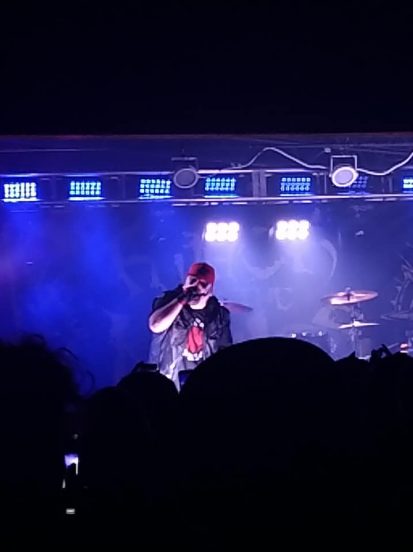 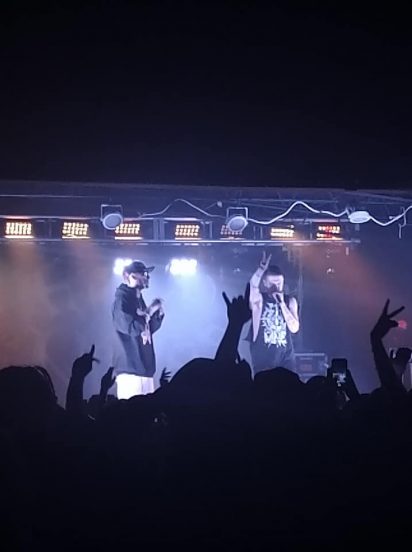 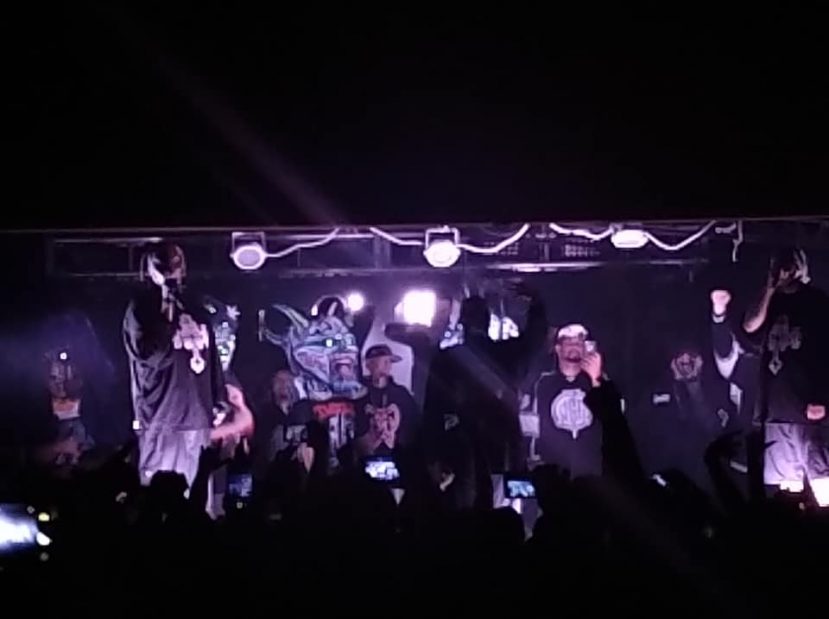 The entire MNE Family took the stage for the finale.