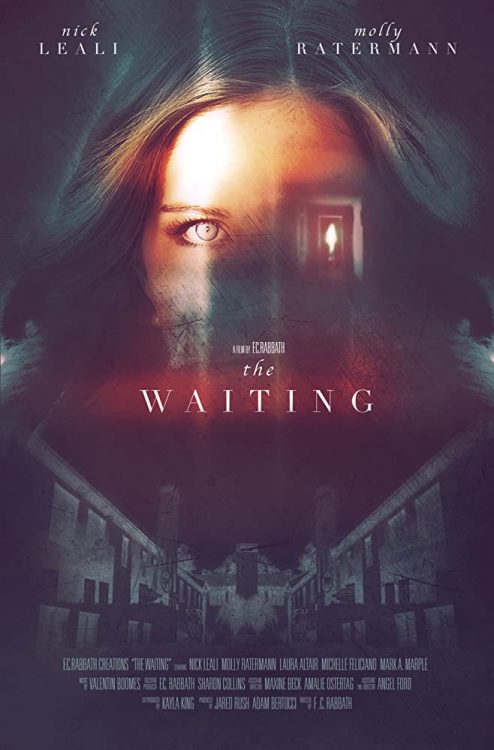 The Waiting is the latest film from F.C. Rabbath, known for his previous works A Brilliant Monster and Watch Over Us, both of which I reviewed in the past. Continuing in the vein of independent horror, this time he brings us the paranormal with a bit of comedy and romance, and a story that is sure to stir the emotions.

Eric (Nick Leali) is unemployed, newly single and not having the best of luck with online dating. But his luck may change when he finally gets a job at The Lodge, a hotel with a reputation for paranormal activity and is said to be haunted. When the staff members tell him about Room 101, he scoffs at the idea. But when his manager Steve (Bob Myers) confirms it, he decides to check it out himself. That’s when he meets Elizabeth (Molly Ratermann), the ghost of the Lodge.

Eric is introduced to Elizabeth

Frightened but intrigued, Eric decides he wants to get to know the tortured soul. Who is she? Why is she trapped? And how will they communicate if she can’t talk? He gets answers to all of these questions but there’s one that still remains: What is their relationship status? And how far is Eric willing to go to bring her soul peace?

One of the first things I noticed about the film was the incredible cinematography; the aerial shots were beautiful. The choice of lighting was also really good, especially during the scenes with Elizabeth. Due to the film having a smaller budget and not a lot of complex special effects, the makeup combined with the lighting helped with the paranormal vibes. The musical score also caught my attention. I really liked the ambience and mood that it created.

Nick Leali did an amazing job as Eric. He’s really good at awkwardness and creating comic relief, but also providing the warmhearted emotions that brought a smile to my face numerous times. And Molly Ratermann relying almost entirely on body language was a creepy, tortured soul that I immediately fell for. The chemistry between the two of them made me think of Peter Venkman in Ghostbusters when he’s speaking with Dana possessed by Zuul.

My emotions were all over the place with this. As I was watching it I was like, “Oh, so it’s a horror flick. Oh, no, it’s a comedy. Or is it a romance?” I laughed, I got scared, I was surprised, I was saddened and also moved. Almost as if this is The Princess Bride of paranormal romance films.

This film could draw a few different audiences, ranging from those who are fans of the supernatural and paranormal cinema, to those who enjoy a good romance with some comic relief.