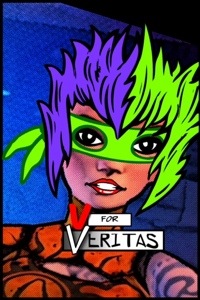 V for VERITAS: The Truth In A Lie [EDITORIAL]

Posted By Veronika Gypsy on Jul 21, 2014 in Editorials, Editorials: V for VERITAS, Featured

I’m known as Veronika Gypsy, but everyone just calls me, V. Your editor and I know one another because we both do photography with alternative models and we tend to hear some really amazing stories. As we got to talking, he suggested that I write for you because, with a little ingenuity, I can tell stories that others cannot. We decided that I would use a pseudonym and that I would change many of the details about my life so that no one would know who I was. By using a public lie like this, I could tell the truth about some amazing women I’ve worked with without risking anyone’s identity…

Although it makes it’s big screen debut in 2014, I discovered the world of the deadly mirror through Mike Flanagan’s short film, Oculus: Chapter 3 – The Man with the Plan, when he submitted it to our sister filmmaking site, MicroFilmmaker Magazine, in 2006. A 30 minute film created in a single room with a single actor for $2,000 swept you into a mystical embrace of powerful storytelling and seriously thrilling scares. The short film got a 9.5 from the critic that saw it, while…

Cyrodiil is the place to go for PvP action in The Elder Scrolls Online. Referred to as AvA or Alliance vs. Alliance, game play pits the three factions against one another, vying for control of the Imperial Capital. Players will attempt to conquer objectives all across the map, each one providing additional resources for your faction. The final goal, to unlock the city gates and claim the Ruby Throne…

The most hotly anticipated MMOG of the year is nearly upon us. Just 2 months until launch and we have been granted early access to check out all the amazing things ZeniMax and Bethesda have created. The best news of all, The Elder Scrolls Online truly feels like the epic first person RPG that inspired it. Sprinkle that game play with some new mechanics, active abilities, and multiplayer and it makes ESO easily my favorite of the series…

As the new DarkestGoth Gaming section gets into gear right before E3, I find myself thinking about the year in gaming. We’ve seen some amazing changes in the world of games with story and games that’ve managed to make you care when you shouldn’t! As we wait for more news on the next Fallout game, Gothic photographer and artist Kat Hood (of KJ Hood Photography) has successfully helmed the collaboration of a group of gothic models, photographers, effects makeup people, and props masters for the largest Fallout themed series of fan cosplay photoshoots in the game’s history.