Itâ€™s rare when you play an iOS game and find that all you want to do is gush over it! When the only thing more fun than playing the game is waxing eloquent about its charms and nuances to friends, family members, coworkers, and complete strangers at Starbucks!

(It’s interesting to note that, in recent history, the two games I’ve been most in danger of doing this with–Survivor Z and, now, Sorcery!–both use the Inklewriter multimedia toolkit created by Inkle Studios to drive most of their story content!)

When you go to Inkle Studios website, the thing that creative team Jon Ingold and Joseph Humphrey reminded me of is Robyn and Rand Miller from Cyan who created Myst –which many consider the origin of all modern “thinking” video games. Like the Miller brothers, Ingold and Humphrey wanted to tell a unique type of tale in a new and unexpected way. Using Steve Jacksonâ€™s original Fighting Fantasy series, Sorcery!, as a guide, they have provided an intriguing way for people to interact with a device that captures the best components not just of the gamebooks themselves, but also of a table top role playing games, with extra seasoning from sound effects and music! (The absence of dice rolling may be a detractor for some, but I felt that having the random logic occur behind the scenes made the interactive strategy far more fluid!)

For those new to the Fighting Fantasy game books, Sorcery! is the tale of a young warrior mage sent out to retrieve a crown of great power from an evil wizard. The crown gives a rightful ruler the power to defend the realm, but can make a corrupt mage almost unstoppable. The introductory bookâ€”Shamuntanti Hillsâ€”is the opening salvo of this grand tale and permits lots of exploration of towns, caves, and ruins, permitting you to make alliances that will help you later, find magic items that could save your life, and earn treasure youâ€™ll need along the way.

To recreate the feel of a tabletop game, Sorcery! crafts a full 3-dimensional map that seems to be made of paper mÃ¢chÃ© and allows you to move your character piece from plot point to plot point, reading ever evolving descriptions and options based on how you play.

The descriptions unfold and are pasted on to an ever evolving scroll of paper, overlaying the 3D world behind–a clever merging of the written and the interactive! Music (for drama) and sound effects (for ambience) further pull you into the multimedia event which is Sorcery!

When it comes time to cast spells, you have a massive volume of spells that you can flip through. However, because they’re tied into star signs, only some of the spells are able to be cast at any one time. As such, whenever it comes time to cast a spell, you’ll spend time deciphering which ones may be cast that will be useful and which ones will get you killed! That forces an extra level of strategy that I love!

Battles are fought between small cut out representations of your character and the monsters you’ll face–in the bloodless honesty of a miniature war! Your use of just the right amount of energy can turn the tides of warâ€”but you could wind up dead if you use up too much energy too soon! (And, if you lose too much health/stamina when a battle is over, they’ll kindly give you a chance to take another stab at it!) 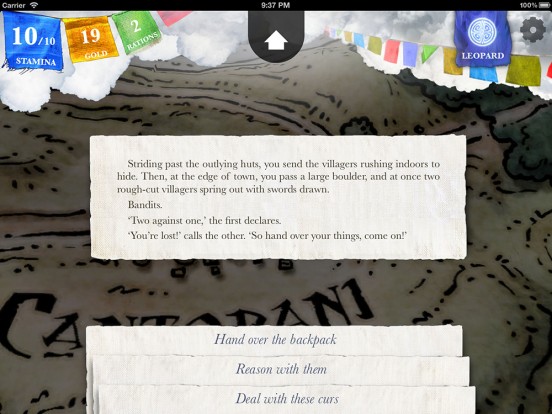 Sorcery gives you plenty of choices. 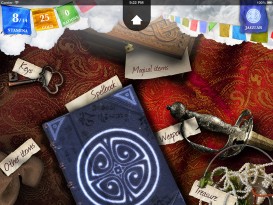 Keep track of your items, because they might save your life! 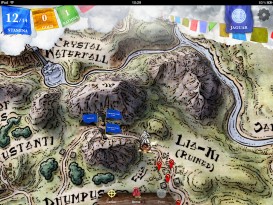 The paper-mache looking map is really a treat! 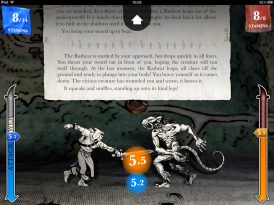 The interactive GM described fight with cutouts is unique and fun! 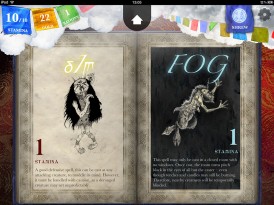 The sheer number of spells may seem a bit overwhelming, but there’s a method to the madness. 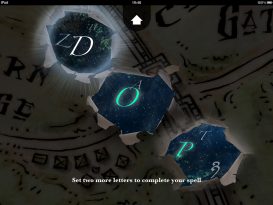 Only some spells will be able to be “perceived” based on the stars at any one time.

Because, like all the best games, the gameplay dictates the presentation, the general gameplay of Sorcery! has been discussed already.

However, here we can delve more into the specifics!

For example, like any good RPG, the objects and trinkets that you pick up will all have impact on how you play the game. Fail to pick up a torch? Then you might not want to venture into the inky black cave. Neglect to purchase that pouch of Goblin teeth? Then the spell for raising Goblins to fight beside you will fizzle without a focal point! Happen to pick up a special friend who cancels out magic? You might end up wasting a lot of energy or even dying because of it!

Further, the morality with which you deal with people will all have impacts on the game. Sometimes its immediate, such as the case of a homeless man that gives you a gift when you share honeycomb with him. At other times, itâ€™s more of an extended cause and effect, like where you do a good turn for one person that earns you a fragment of a spell that allows someone else to help you out of a jam a long way down the line! And still others will have repercussions only in future chapters! (Fortunately, your game is shared to the Cloud so you can pick up where you left off when the next chapter comes out. Fortunately, the developers assure me that the cloud will save ALL of your games, so for those of use whoâ€™ve done multiple playthroughs, you will have the option of selecting from your different versions. This makes replayability much more pronounced!)

That so much is put into the game is what makes this game so riveting and, in terms of pure enjoyment, manages to put to shame the most elaborate of next gen fantasy RPGs–even if this chapter is a bit short to truly compare the two!

Love of analyzing the world and trying to figure out the big challenges around us through metaphor has led many of us in the Goth community to have a lifelong love of imaginative reading and roleplaying games. As such, this is a straight win for Gothic Fit!

In fact, the only thing missing from a good Gothic cosplay RPG session is your costume–and nobody’s saying you can’t dress up to play Sorcery! (In fact, send us a high Rez picture of you in your favorite outfit playing Sorcery! and we’ll put the best ones in a gallery!)

I’ve never seen anyone more masterfully capture the feel of a really well thought out table top RPG the way Sorcery! does, and Iâ€™ve been involved in paper and video gaming for decades.

The only thing that could improve on it for the future would be if they got an amazing narrator to bring the GM descriptions to life! (Of course, to do the rest of the game justice, it would have to be someone incredible, like Tony Jay, Simon Templeman, or Rene Auberjonois–y’know, all the VoiceOver gods from The Legacy of Kain: Soul Reaver dynasty! How awesome would that be??)

Now Iâ€™m getting off to go back and replay Sorcery! again, but be sure to tune in soon when we review Sorcery 2: KharÃ©, Cityport of Traps!