Itâ€™s the Warcraft game no one expected. Hearthstone just started open beta, but even in the closed betas I was able to participate in, it has already taken the gaming world byÂ
storm, with well over 1 million gamers participating. And unlike many games that are free in beta, but will have a cost afterwards, Hearthstone–taking a page from freemium models like SolForge–is completely free to play.

From the moment the game starts you can absolutely tell it is a Warcraft game. It carries over the bright, almost cartoon like art any Blizzard fan will recognize and combines it with quirky, almost over the top effects. Cards slam down on the board, kicking up dust, radiating lightning or any number of other unique effects. Spells light up the board with fireballs, frost bolts, and flying daggers. The interface feels truly tactile, even though I was using a mouse to move my cards and make attacks it felt as though the cards had real weight and presence on the board.Â Attack your opponents minions or strike directly at their hit points.

As with other free to play games on the market today, Hearthstone does have 2 monetized features. New packs of cards and the arena draft mode are both locked behind a pay wall. Fortunately, both of these features can also be unlocked using the in game currency (gold) which is rewarded by completing challenges and daily quests. Â Those who want to jump in with lots of cards or play some early arena might spend a few dollars to get started. Â Of course rare monsters add a fun element to the game and make some fun deck building opportunities but I found even the default cards to be very competitive.
Everything boils down to building a well-constructed deck and making good gameplay decisions more so than having a large number of rare/powerful minions.
I really hope to see integration with other Blizzard titles, specifically World of Warcraft. Â It would be especially cool to offer rare cards or special editions of cards for defeating bosses or completing achievements in other games. Imagine defeating a new boss monster in World of Warcraft then logging into Hearthstone and having that boss as a new card to use.

At the start you are offered a choice of nine deck themes, all based on heroes and classes from the Warcraft universe. I stuck with my World of Warcraft companion of 8 years, the Rogue. Once you pick your hero, Hearthstoneâ€™s matchmaking system will find opponents of equal skill to battle against. Â At the beginning of any game both players are dealt a random assortment of cards and given a chance to mulligan, a onetime redraw of as many cards as desired. Â Once both players have made their selections the battle commences. View all your available cards and build new decks.

The objective of any battle is simple; reduce the enemy heroâ€™s health to zero. Â Donâ€™t mistake your hero for a mere hit point repository though. Â Some heroes, like my character of choice, can equip weapons to dismember enemy minions. Â Still others can throw fireballs at minions, heal themselves at will or sacrifice life for more cards. The use of all these abilities is limited by the resource system, mana.
The implementation of mana as a renewable, non-storable resource completely neutralizes any risk that Hearthstone could become focused on the resource management metagame. Â Instead of banking resources for future turns, or micromanaging resource regeneration, mana is constant. Â Every turn each player gets a full mana bar to use plus one additional mana. Â Games start at one mana and progress from there. Â By turn seven or eight, both players are generating enough mana to be able to play fun, powerful cards.
Keeping the game simple and action packed creates an environment wherein matches move quickly. Â I found most games lasting no more than 10-15 minutes. Â Within an hour of building a new deck, youâ€™ll have already played half a dozen games and be well into optimizing your deck. 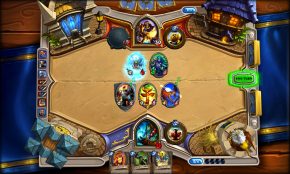 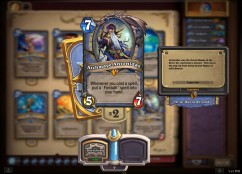 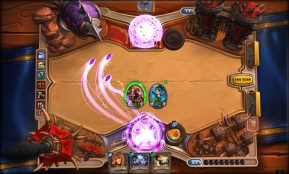 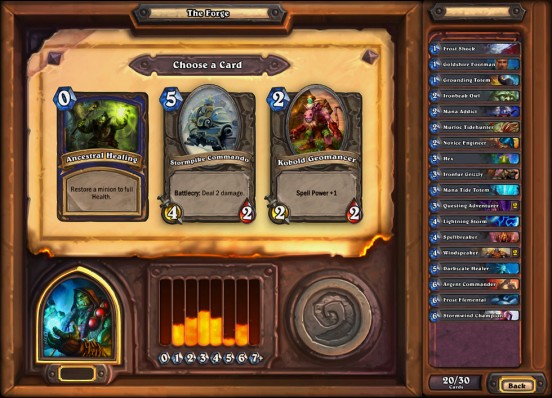 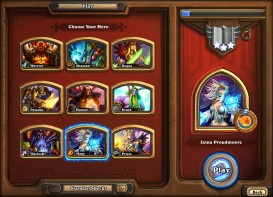 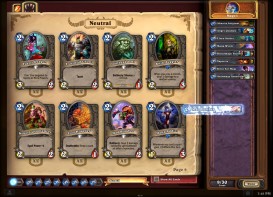 Hearthstone certainly takes me back to my days playing Magic: The Gathering and is sure to engross any fan of competitive card games, past or present. Further, the trimmed down nature of the game in combination with a free entry cost makes it a perfect game to introduce even non gamers to the genre. And the bite size content makes it really easy to play even if you only have 15 minutes. Perfect for the card gamer with a busy schedule.