True to its roots, The Elders Scrolls online features you awakening in a prison. Not just any prison but the eternal slavery of Coldharbour and its master, the Daedric Prince Molag Bal. Aided by a mysterious apparition and a helpful stranger you break free. Once back on Tamriel you must discover the truth of Molag Bal’s plans and avenge those betrayed by you own executioner.

Before the story I mentioned before can being, though, your first step will be creating your character. The customization is immense, so; prepare to spend hours crafting your perfect digital avatar, as there are sliders for everything from eyebrow height to ear tip flare to chin length. Zenimax has also been kind enough to offer a random character generator as well for those that want to get right into the action.

Along with finding that perfect look, you will also need to pick a class. There are four to choose from though – not unlike past Elder Scrolls games – what you choose here won’t necessary determine your play style or role within a group.

Nightblade: Nightblades are adventurers and opportunists with a gift for getting in and out of trouble. Relying variously on stealth, blades, and speed, Nightblades thrive on conflict and misfortune, trusting their luck and cunning to survive.

Templar: These traveling knights call upon the powers of light and the burning sun to deal massive damage to enemies while restoring health, magicka, and stamina to their allies.

As I mentioned before, your class choice doesn’t limit gameplay flexibility, because unlike most RPGs, any class can use any armor or weapon type. You could choose to play a sorcerer, and then outfit your character with a bow and medium armor and play like a rogue or thief; alternatively, select a Dragonknight, then wear robes and fling spells with a magic staff. As weird as it sounds, this kind of freedom works very well.

From the time you escape, you write the story and the amount of freedom you have embraces one of the greatest aspects of the Elder Scrolls universe: exploration. Exploring the world is rewarding on its own, you’ll find all kinds of interesting places and characters, such as a pair of travelers on the roadside arguing over their inability to start a fire. An attentive player might notice a small fire pit on the ground between them and, being a curious natured soul, attempt to interact with it. When the fire blazes to life, not only do the travelers offer their thanks, but the game does as well, awarding a small amount of experience for going beyond the run of the mill MMO grind. Events like these aren’t quests or indicated as important in any way but keep your eyes open and you’ll find multiple bonuses like this that make the world come to life.

You won’t find quest hubs in Tamriel either, instead of being sent on quests to kill X of some creature or collect Y and return the objects to Z, each quest plays out like a novella. Every task and every action feels important, like you are playing a role in the development of the world and this integration makes questing the greatest strength of the game and it really allows you to lose yourself in Tamriel. If that weren’t enough all the quests are fully voiced by a talented group of actors including Dumbledore himself, Michael Gambon and John Cleese of Monty Python!

While adventuring across Tamriel, you’ll also find dungeons everywhere. They come in two flavors, public dungeons or “delves” are open instances where you’ll find possibly dozens of others questing alongside you and 4 player premade dungeons, designed to test your skill in small group play. While it was neat to see other players hunting down the dungeon boss it was common to see people stacked on top of the bosses spawn point and farming kills; from that standpoint the public dungeons would probably be better if designed for solo players looking to prove their mettle. The premade group dungeons are completely different beasts; providing unique challenges and storylines and emphasize teamwork between players to get to the end. 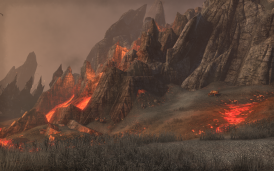 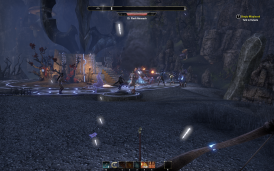 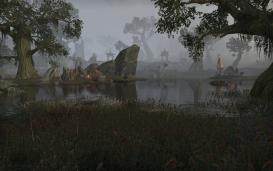 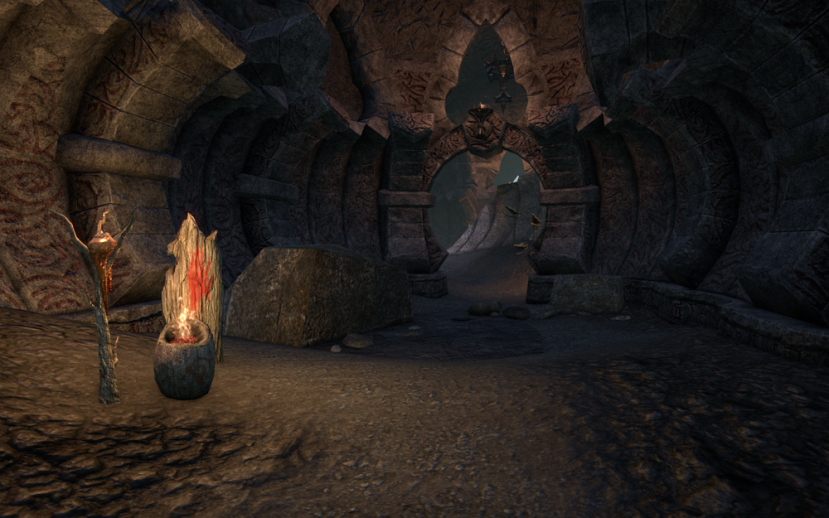 Explorable dungeons are scattered across the world.

Left click to attack; right click to block, both staples of the Elder Scrolls series. ESO adds something sorely needed and absolutely refreshing: active abilities. Using Magicka and Stamina as resources, active abilities are instant strikes and spells to help you dispatch enemies in a more engaging fashion. Magicka allows you to use specialization abilities so, for example, my Nightblade (think rogue/thief) became specialized in assassination which allowed me to utilize deadly strikes and to slip through the shadows and ambush enemies for huge amounts of damage. Stamina on the other hand is reserved for weapon attacks. These abilities are punishing physical attacks, often leaving residual bleeding damage on the target or giving you helpful buffs. Stamina has another use that keeps the action fast paced, as well: the ability to dodge.

Overall the combat feels much like previous Elder Scrolls titles with a bit of MMO flavor on the side. Some of the active abilities feel like they lag slightly on activation, it almost seems like there are hidden cast times on some abilities which are not indicated by the interface. Once you play for a few levels you’ll become accustomed to the delay, but it doesn’t feel as smooth as it could.

The user interface is my biggest issue with this game, it tries to be minimalistic and stay out of the way, but instead it trips over itself making basic actions far more difficult than need be and purposefully hiding information. Things like short term power ups (buffs) on my character and damage over time abilities on my target are hidden. Additionally, every menu and window forces the camera to change perspective, making it cumbersome to quickly swap abilities or check stats.

Dodging and blocking in combination with active skills really increase the pace of game play and absolutely keeps it engaging. However, it does make first person perspective a bit more difficult to play in. After the first few levels I found it much easier to keep up with the flow of combat from the third person perspective, which admittedly makes the game feel a little less like its predecessors. Perhaps a wider field of view in first person would help keep the two viewpoints on a more even footing.

It’s a high fantasy RPG with all the customization and open world freedom you can imagine. Every character is unique and you get to tell your story, your way. Become a werewolf or vampire and base your entire play style around that if you like. Or you can team up with the fighter’s guild or the undaunted and rid the world of evil creatures. The only limitation to what you can accomplish, look like, or become is your imagination.

The Elder Scrolls Online is a fun MMO and more importantly a worthy Elder Scrolls title. The world is beautifully presented and the combination of amazing questing, a focus on world exploration, and fun easter eggs brings it to life in a way that is unique among MMORPGs. The combat is fun though not as sharp as I would like but it does mimic the classic elder scrolls style very well. Fans of the series should find something to love here, if you can stomach the $15 monthly fee.