If you’ve never heard of the brilliant Inkle Studios’ digital re-imagining of the Fighting Fantasy gamebooks, Sorcery! (from Steve Jackson), you’re in for a treat.

To begin with, read our reviews of Sorcery! and Sorcery! 2.

I will assume you are aware of what those reviews covered in this newest review, so as not to grow repetitive.

In concluding the last game, Kharé: Cityport of Traps, we unraveled a mystery involving mages and an invasion that permitted our adventurer to escape Kharé with our hide intact and made our way into the forbidding wastelands known as the Baklands.

In this new chapter, we find ourselves in the Baklands, blazing a trail for the metropolis of Mapang—home to the deadly keep where the Archmage who has taken the stolen crown has fled—only to discover that 7 deadly serpents are hunting us. These serpents are the treacherous servants of the Archmage and, those who don’t kill us, will rush back to Mapang with information about our mission. If even one escapes to tell their master about our mission, our chances of a sneak attack on the capital city are doomed! So we have to not just elude these serpents who wish to consume us, but actually hunt them down, discover their weaknesses, and use that knowledge to destroy each and every one of them!

On one hand, the presentation of Sorcery! 3 (S!3) continues to stay very consistent with the series to date, including actual drawings from the original books when available, pen-and-ink illustrations during battles, hidden dice roles to determine combat seamlessly, and an interactive map to drag your character across.

On the other hand, they’ve made lots of presentation improvements that might go unnoticed by a lot of gamers.

First off is the overhaul of the rewind system. Those of you who’ve read my last two reviews know that I’ve wanted this to be improved, because it was WAY too easy to jump too far back in time and lose a bunch of valuable things that way. Inkle listened and really improved things!!

While there’s still no redo option if you go too far back, they’ve greatly decreased the possibility you’ll screw things up inadvertently by giving you a rewind playhead that lets you “scrub” back in time, watching your icon move to each stopping point along the way. In addition to minimizing the amount of cursing you end up doing, this playhead also reveals what time of day it is.

With this improvement to the playhead and visual time representation, they’ve been able to make waypoint markers much less obtrusive (which is especially important now due to reasons I’ll discuss in the Gameplay section).

All in all, Sorcery! continues to look and perform great on the iPhone 5S I tested the preview version on and it is continuously stable whether you kill the game or leave it minimized or get phone calls. This really needs to be emphasized, because I can’t tell you how many amazing games fail when it comes to living on a phone because they’re unstable in one of these areas, so it continues to be great to see how well Inkle does these things!

The Sorcery series has always bridged the written word with fascinating multimedia. 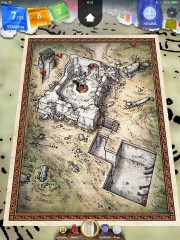 While there aren’t as many buildings as in Kharé, there are still some cool ones like this Temple. 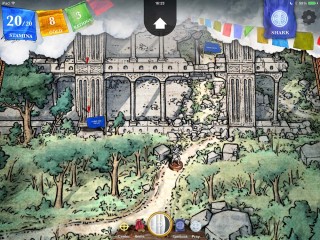 In the last game, they introduced us to both Swindlestones–a metagame for discovering info about people–and to time travel—via sorcerous enchantment.

Swindlestones was a cool idea that failed pretty blatantly for me because it was very difficult to win and it was almost never played without a wager–meaning you could quickly blow through a lot more gold than you want to trying to get information about people you’re playing with. I wanted a more story centric version of the game for a future edition and they made that a reality.

Now Swindlestones—or Mindstones, depending on who you play with—is far more likely to be played for free, permitting you to concentrate on gleaning info about the person you play with. It’s also a little bit more winnable—although I still lost roughly 85% of the time.

Time travel which involved a ghost in the last game is now a controllable phenomenon in the new game, through the presence of interactive beacons that you’ll have to activate and then use to illuminate areas of interest. The complexity of options this time travel gameplay opens up is really cool, for the most part. (Granted, I would’ve liked a definitive success message–or a sonic tone–to show up whenever you illuminated an area of time difference. Currently, there is just one new menu option that will show up on some sweeps, but it was so sporadic that I didn’t find it a reliable way to measure success. An even better thing would be to show new waypoints with the beacons as they’re revealed—maybe in another color to show that they’re out of the current time— and maybe a percentage meter for how many possible waypoints a specific beacon has revealed out if the total possible waypoints for that beacon.)

Because they’ve created a much more interactive map that you can explore and retrace to find things through this time travel mechanic, they’ve also made all things take time–whether it be casting a spell or moving from one marker to the next–so you’ll have to weigh how much backtracking you want to end up doing vs. your supplies. (Fortunately, they’ve provided ways to find more supplies and money through your journey so the completionist is much less likely to starve to death! It’s still a strategic concern, but it’s a not a crippling worry.)

Also, you’ll be happy to discover merchants that will actually buy things off you, like those Ape teeth you found in the first game (and haven’t had anything to do with) or those less powerful swords you’ve held on to. (In fact, there’s even a guy that’ll buy one of your own molars for 30 gold! But you can only use his services for a single tooth ONE time, so you won’t be living the high life trading teeth for grills!)

Additionally, I had hoped they’d make it easier to find and keep certain items and they have. (In fact, they might’ve almost gone a little too far in allowing you to find magic loot, because, by the end of the third game, I’ve got almost every spell artifact in existence–and triplicate of a few items that probably should be a bit more rare. ) Fortunately, the spell options fluctuate enough that you rarely feel like things are too easy.

You’ll also find places to use things that you’ve been holding on to for quite a while, like that Rope ladder or that bow and arrows.

With that said, there is one thing I’d like them to work on for the future:

Now that nonlinear exploration is possible, have more merchants that you can return to more than once.
In S!3, only two merchants–a fruit vendor and a fish merchant–can be used more than once. This is especially problematic because neither of these merchants will (a) buy objects from you, (b) sell you non-food items you may not have had money for before, (c) cook raw food you picked up for you, or (d) buy items off you. 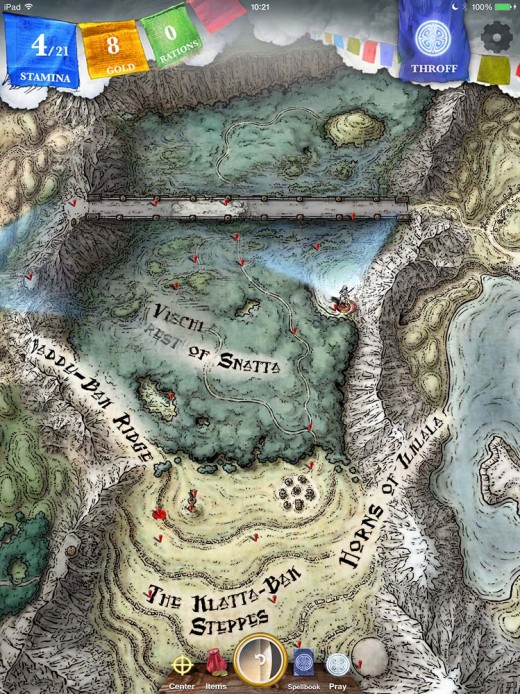 The Baklands represents a massive map to explore. 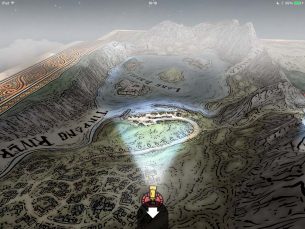 The Beacons change how time passes through the Baklands. 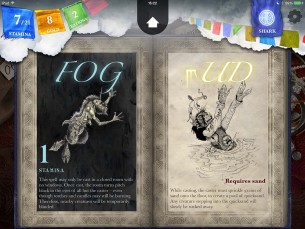 While traditional spells from the last games are present, there are some brand new ones you can learn if you keep your eyes open. 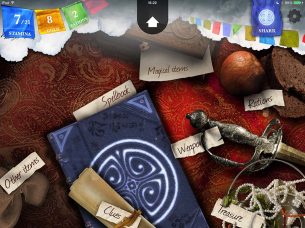 And lots of new magical items to allow you to use spells you’ve never done before. 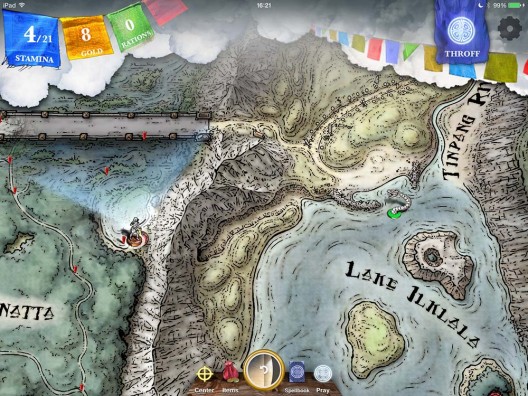 In your journey, you’ll track down the locations of the serpents who want to destroy you. 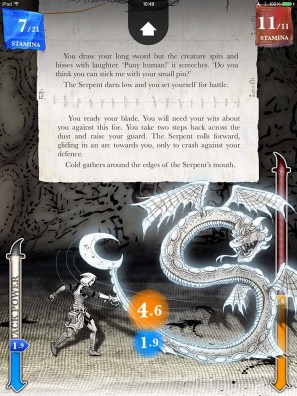 And, if you don’t find out their weaknesses ahead of time, you’ll have to fight the serpents: blade to fang!

A mysterious quest to travel through time to destroy mystic snakes, communicate with ghosts, and destroy civilizations for the home to defeat a treacherous mage? Check!

Gothic as all get out? Absolutely!

What could be better than having a massive paper & pen rpg with you wherever you go, that you can play when you don’t have a D&D party or a Magic tourney to go to?

Inkle continues to push the boundary on what you can do on a mobile device, creating a form of digital RPG that feels like the best type of paper RPG, which is stunning in its complexity and replay-ability! With each chapter in this saga growing longer and more complex, the final chapter will easily usher in the Sorcery! Saga as the most console-competing game in mobile history, likely weighing in at 50-60 hours of initial playtime –to say nothing of the amount of hours worth of replay. And the fact that Inkle continues to listen to fans and critics to make the saga evolve and become more fun is awesome.