A couple weeks ago, at Gen Con, I had the pleasure of sitting down with Cryptozoic’s Vice President of Creative, Adam Sblendorio. Cryptozoic is one of the better known Indie game houses to explore licensed IP (intellectual property) in their games. They’ve been responsible for the trading card game versions of The Lord of the Rings and DC Heroes, as well as original creations like Epic Spell Wars of The Battle Wizards: Duel at Mt. Skullzfyre (which was recently featured on Wil Wheaton’s Tabletop). The beta of the Ghostbusters game in play.

While all current Ghostbusters’ IP will be included in the game, upcoming IP—like the 2016 Paul Feig Ghostbusters reboot and the announced Ghostbusters-universe movies—would not. Obviously, if this game proves half as popular as it already seems like it will, they will undoubtedly work out some arrangement with Sony for a follow up!

The game plays 1-4 players with a cooperative episodic feel that reminded me somewhat of the Pathfinder Adventure Card Game. The game will include 10 double sided game board tiles for a variety of combinations and 48 28mm PVC figures, including everyone from Venkman & Spengler to Slimer & the Stay Puft Marshmallow Man.

While an official price has yet to be announced, the anticipated price as of the Kickstarter was a somewhat hefty $80. This isn’t a huge jump from similar games like the aforementioned Pathfinder Adventure Card Game (which starts at $60), but it’ll likely make a lot of folks want to check out reviews of it ahead of time and see it covered in shows like Wil Wheaton’s Tabletop before pulling the trigger.

While the official release date has not yet been announced, industry buzz has it that the game will be released around Halloween, which would be appropriate!

To see an early play test of the game that Cryptozoic Uploaded earlier this year, check out:

To read more about the game and see what’s included in the box, go to the Official Ghostbusters Board Game page.

As to what else will be coming out from Crytpozoic this fall, Sblendorio was also very pleased with the upcoming release of Portal—a board game very “loosely based” on the extremely popular video game of the same name. No official release date has been listed on the Portal page, but it was also in full beta test at Gen Con and could be out before Ghostbusters.

Epic Spell Wars—which has proven very popular with our audience—has an anticipated 3rd release coming out around Gen Con 2016.  For more from the Cryptozoic booth, check out the images below. 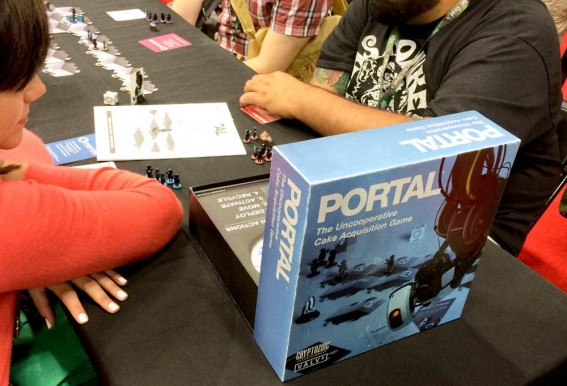 After Ghostbusters, the next licensed IP game released will be Portal, based on the popular video game. 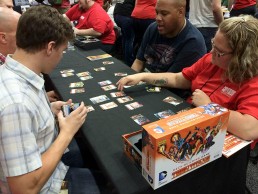 Cryptozoic does a number of DC-based trading card games beyond DC Heroes, including Teen Titans. 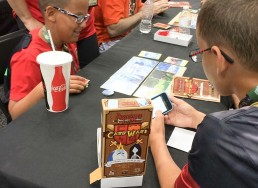 For more about Cryptozoic and their upcoming games, go to: www.cryptozoic.com