Home » Article: Conventions/Gatherings » Among the Shrieks of COSPlay: ScareFest 8 [EVENT/ARTICLE]

The horror just keeps improving with each year!

ScareFest is the annual horror paranormal convention that has been going on since 2008.  It takes place in downtown Lexington, KY. Christine back to her old tricks again.

Since I first attended ScareFest last year, I waited in anticipation for another year to come about; I was not disappointed.  This year’s horror convention was even better than the last one, and many of the people who have attended for years agreed that the event onlookers are bringing much more to the floor as time goes on. As I spent a lot of my time chatting with the celebrities, my wife spent most of her time talking to the amazing vendors that were present.  (It’s very painful attending events like these with very little money!)  We came across some very impressive artwork of old horror icons, some independent movie directors promoting their movies, and also some local authors.  I met a man by the name of Nic Brown who authors the Werewolf for Hire novels, bought a copy and it’s pretty impressive thus far.  However, when I wanted to buy a dead pig in a jar from a taxidermist vendor my wife put her foot down. Vagabond Artists Collective. Put on an amazing sideshow at the event.

Circus Envy has attended ScareFest for many years and they put on random shows and entertainment during the event.  Envy is the head of the group, while he has his dancers and drag queens drawing a lot of attention from people who are just passing by.  In the main hallway there was a sideshow performance called the Vagabond Artists Collective, showing some very impressive acrobatic skills while heavy metal/techno music played in the background. 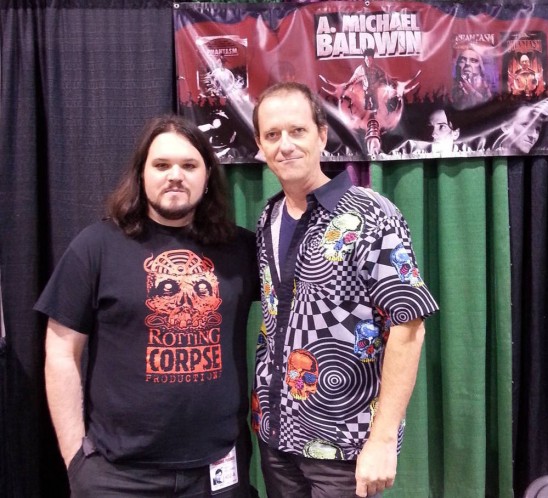 A. Michael Baldwin, best known as Mike from the Phantasm series. 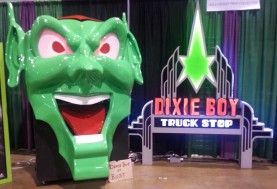 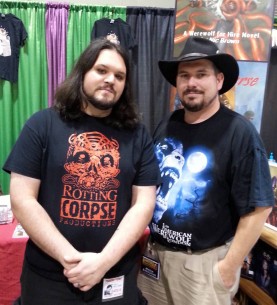 Nic Brown, author of the Werewolf for Hire novels 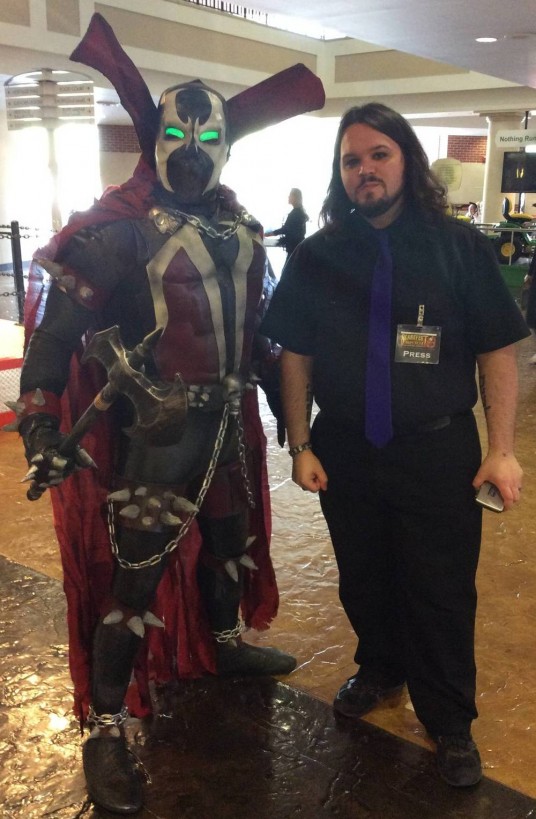 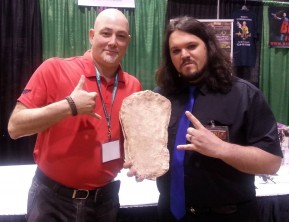 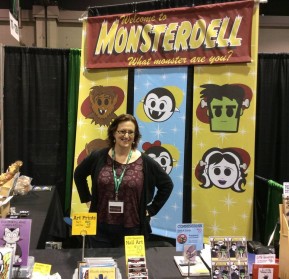 Rebecca Hicks (author and illustrator) of Megableh and Little Vampires 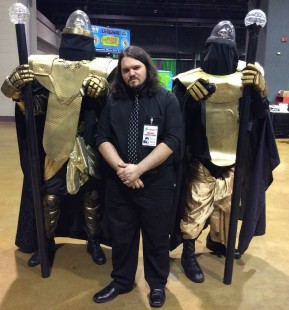 A couple of weird alien guys, say they designed their own costumes. 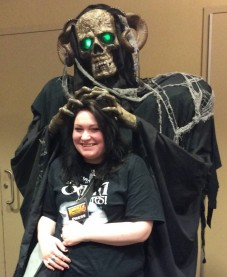 Rev. Leviathan’s wife getting attacked by an attendee 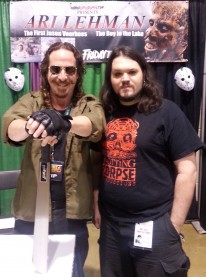 Ari Lehman, the original Jason Vorhees and frontman of the band, First Jason 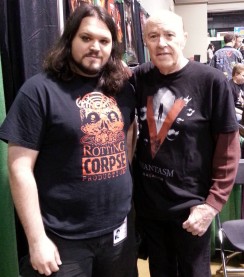 Reggie Bannister, “the hardest working man in horror,” known best as Reggie in the Phantasm series.

Well, they look like a happy couple, don’t they? 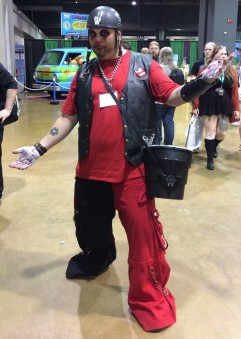 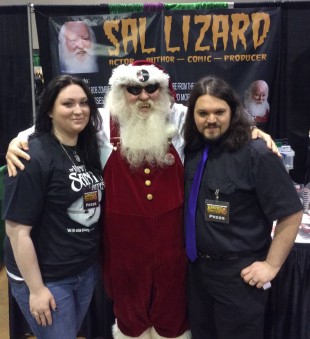 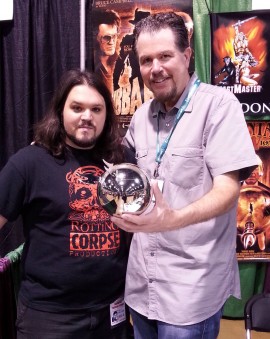 Don Coscarelli, director of Phantasm, The Beastmaster, Bubba Ho-tep, and John Dies at the End 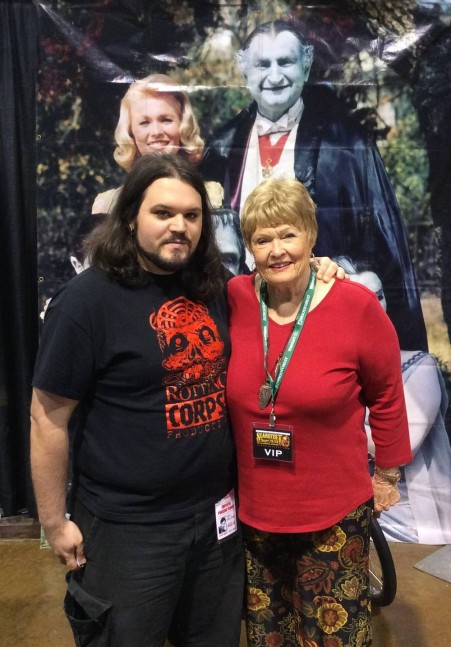 Pat Priest (Marilyn Munster) from the TV show The Munsters 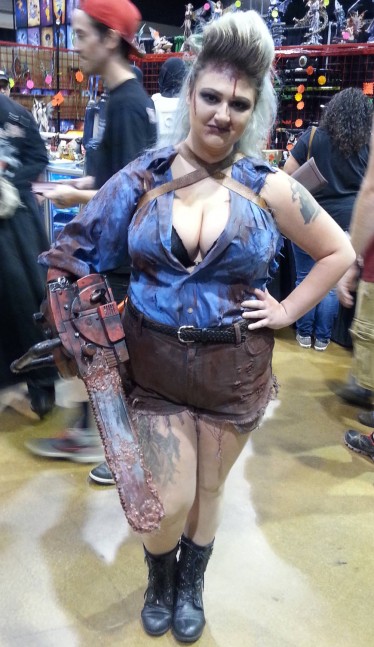 Attending the event as press this year I was honored and privileged to meet and interview many of the celebrities and a couple of the entertainers.  Meeting Don Coscarelli was a real treat seeing as he’s directed a few of my favorite films.  Many Phans (Phantasm fans) were there and I don’t know how many times I heard people ask him “When’s it coming out?” referring to the latest in the series, Phantasm V: Ravager.  Also met a few other people from that franchise, but sadly Angus Scrimm (The Tall Man) had to cancel at the last minute due to health issues.  All of the celebrities I met were very cool and down-to-earth with their fans.  I also got to meet an old crush from my childhood: Pat Priest (Marilyn Munster).

My wife and I both attended two seminars.  The first one was by Mr. Steve Kulls, the Squatchdetective.  He gave a pretty impressive talk on Bigfoot and the nature of the legendary creature.  I was already a Bigfoot enthusiast so I was excited about hearing him speak, but I also got to hold a cast of a footprint.  Once that session was over my wife stated that she’d never really believed before but now she’s seriously considering the possibility of the existence of Sasquatch.

The other seminar was presented by Chris Dedman, who’s been seen on A&E.  His topic was demonology and his history in the field.  He shared with us some very disturbing images from exorcisms and cases of poltergeists, and personal stories of what has happened in different cases he’s investigated.  He closed the seminar stating that it will be his last time speaking at ScareFest due to being full staff beginning next year.  Missed him last year so I’m pretty happy we caught him this time.

The event ended with both of us running on only four hours of sleep, since we’re night owls and had to mess with our sleep schedules to attend; a small price to pay for an awesome weekend of horror.

The attendance at this year’s ScareFest was much higher than last year’s, showing that the popularity of the convention continues to grow.  Join us next year (Sept 30-Oct 2) at ScareFest IX where more horror fantasies will become realities.