For those unfamiliar with the Pathfinder Adventure Card Game (PACG), it was created by designer Mike Selinker in 2013 to give fans of the Pathfinder RPG a way to play campaigns in Golarion without a dedicated gamemaster. To do this, he created a card based system for characters, locations, monsters, villains, allies, henchman, barriers, and adventures, as well as for the gear you’ll want to pick up: weapons, spells, armors, loot, items, allies, and blessings. Time is measured though a randomized blessings deck and you must work with as many players as you have to track down and defeat progressively harder villains to win the day.

Unlike a game like Magic: the Gathering, which is competitive and uses custom built decks to exert a player’s dominance, PACG uses cooperative gameplay and allows you to organically improve your character’s gear for future scenarios as you beat games and discard lower quality equipment in favor of new things you’ve discovered. A number of individual games (or “scenarios”) make up larger adventures which in turn are part of larger adventure paths. Like a traditional RPG, as you defeat more complex campaigns, you’ll have the ability to upgrade your character’s abilities, stats, inventory card allowance, and, eventually, specialization.

In the Skull & Shackles edition of PACG, you are one of the Buccaneers who is allied to the Hurricane King. In his “fleet,” you’ll prey upon the boats making their way through the shipping lanes surrounding the Shackles—a maze of islands and ports that you and other pirates have infested. Every progressive scenario will have you defeating henchman, closing off ports, and finally destroying increasingly harder villains. 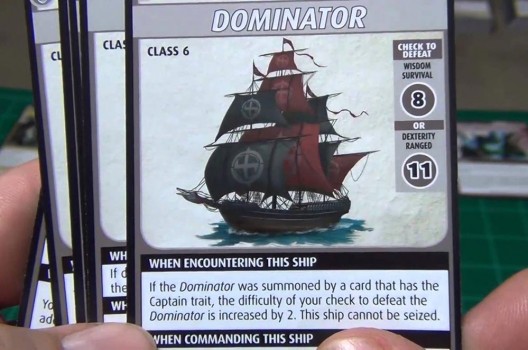 The new ships give you a new way to move your team around.

Henchman are defeated in any islands or ports that the villain is not. 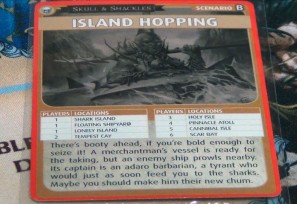 Each scenario consists of numerous locations based on how many players you have. 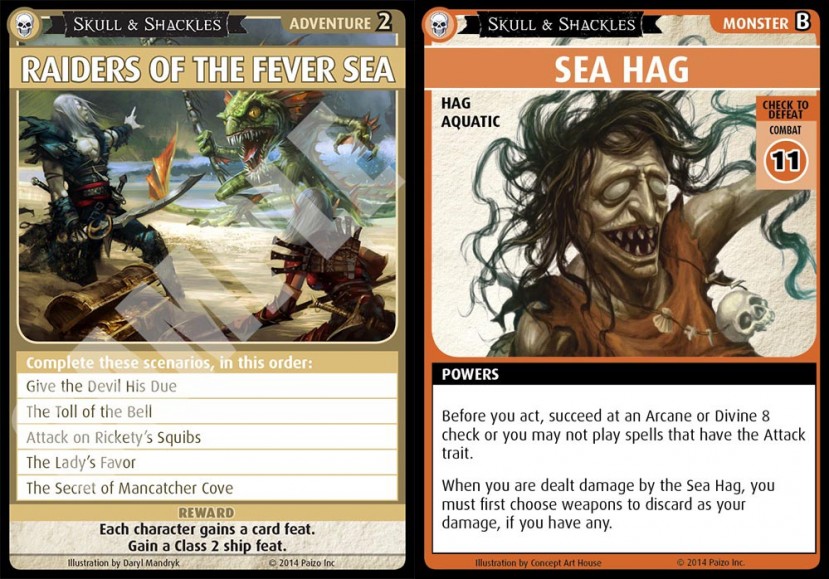 Adventures (left) consist of multiple scenarios and usually unlock new abilities while monsters (right) are the most common peril you will face.

The visual look and style of this massive card game is beautiful, with a wonderful pirate flavor to almost everything, from parrot allies to buccaneer henchman to sunken treasure scenarios to floating shipyard locations to dead man’s chest barriers.

You’ll choose from one of 7 heroes in the main game, each of which includes a double-sided token card and two stat cards with checkboxes (and you can also download a PDF version of these cards from Paizo’s site, so you don’t have to mark up your cards)! Lem (the Halfling bard), Valeros (the Human fighter), and Merisiel (the Elven rogue) return from the Rise of the Runelords game, but they now have different stats and abilities, while Lirianne (the Half-Elf Gunslinger), Seltyiel (the Half-Elf Magus), Jirelle (the Half-Elf Swashbuckler), and Alahazra (the Human Oracle) are completely new.

All of these characters have the ability to help their compatriots through sharing blessings or items with them at crucial times, but many also have active abilities that can assist colleagues. On the most collaborative side, you have Lem & Valeros who have extremely useful co-op abilities to help others while, on the least collaborative side, Merisiel’s abilities benefit only her and discourage group interaction; the rest of the characters are somewhere in-between.

If you want additional choices, you can add on the “Character Expansion” pack, with which you gain Feiya (a Human witch), Oloch (a Half-Orc warpriest), Damiel (an Elf alchemist), Lini (a Gnome druid), and the ability to play with 5-6 players. We tested this expansion out and found that the co-op ability of Oloch—who can essentially make a show of force to help other characters win their rolls—was most useful in play, followed closely by Feiya—who can recharge cards to minimize the roll requirements of her colleagues to acquire spells and monsters.

While this could be qualified as presentation or gameplay, the setting up of all the locations before a game seemed most like presentation, and, in regards to this, the 25-35 minutes needed to set up all the cards and stacks (depending on how many players you have), and then another 20 minutes or so to tear it down (if you’re being at all orderly about it) were the one downside to presentation. (Although I love the organic nature of the cards, those two elements make me look forward to the online version of the game they’ve been working on.)

One of the things I’d love to see in regards to presentation in the future are official tutorial videos made by Paizo, so that if you’re more a visual or demonstrative learner, it’s easier to figure out the rules. (I had to read through the 30 page rulebook a couple times to feel comfortable playing the game, due to the number of different elements involved, and still had to look up videos other players had made to fully get the hang of it. A good, concise video could minimize the use of the rulebook to simple clarification purposes, which will get more people comfortably playing faster.) 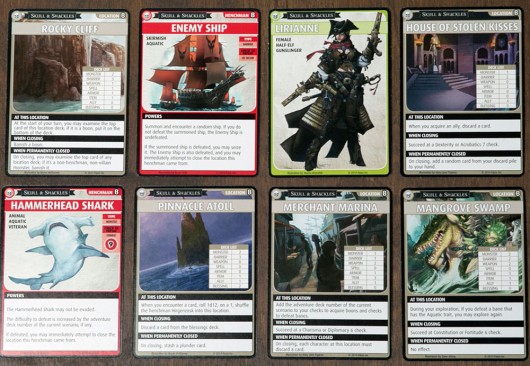 Before playing, you sort your cards in piles for monsters, tokens, locations, etc. 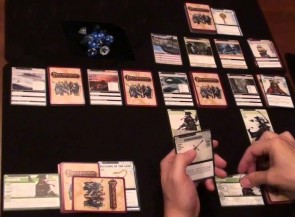 Some players choose to play via the side-by-side, horizontal method.

Most choose to play by the suggested vertical arrangement method.

While the main goal of Skull & Shackles is the same as in Rise of the Runelords—which is to say, closing out locations until the main bad guy has nowhere to run and then defeating him—one new gameplay element unique to this version really ups the seagoing flavor of play: ships.

You and your teammates travel by ship, which you’ll use to fight other ships (and which you can also seize when you defeat—although, strangely, you lose it at the end of each game until you officially “unlock” it). Your ship can be destroyed, leaving you wrecked until you can repair it, and you have the ability to drop off teammates who work better on their own (like Merisiel) at different locations. Along with the boats comes new traits like ‘swashbuckling’ that can make things more challenging (or easier, if you’re a scurvy seadog)!

The clever use of marine elements, treasures, and exploration, along with a game system that can be played with as many as 6 players or as few as one give Skull & Shackles a lot of great potential for fun. We had a chance to try out the game with all six adventure decks—The Wormwood Mutiny (1), Raiders of the Fever Sea (2), Tempest Rising (3), Island of Empty Eyes (4), The Price of Infamy (5), and From Hell’s Heart (6)—which each added 110 cards to the game, including new loot and treasure like Bottled Lightning, Grayflame Maces, Flaming Buckler Guns, and Staffs of Weather. There is a ton of play value here, with each pack adding a full adventure of 5 scenarios. (You get the Wormwood Mutiny along with a starter adventure in the Base Set and each additional pack is less than $20.)

Despite all the great improvements to PACG through the Skull & Shackles edition, the overarching game continues to struggle with finding the right middle ground between chance (via dice rolls) and skill (via modifiers). That means that the game can be very fun when you’re having good rolls, but, when you have a string of bad rolls, it feels like there’s very little way to catch up. It also has difficulty being story driven, due to the minimal flavor text that can fit on cards.

With that in mind, here are the five things I’d love to see in the future:

Some of the most Gothic attired people of history have been pirates, which is fitting because a game about a magical pirate world where you can unearth treasure, send people to Davy Jones’ locker, and fight all the literary monsters of the deep is pretty gothic all around. (The fact that we get to use RPG dice in the process only adds to the modern Goth flavor of this game!)

With that said, for a future PACG, I would love to see them take a turn through the intrigue filled city of Caliphas and get a chance to explore things through the eyes of characters like the dhampir investigator Larsa or the priestess explorer Jadain from F. Wesley Schneider’s Pathfinder Tales novel, Bloodbound.

It would be really great if they could preserve the flavor of a PI investigative tale in such a world, with clues, witnesses, and confessions being what you’re rooting out at each location. A scenario might be beaten when you get all the data needed to move to the next chapter in the tale, so that it feels like there’s a logical connection between each scenario and the greater mystery story. (Maybe have each new adventure start with some gritty narration that further stitches things together, as well, especially if a story book is included like I mentioned earlier.)

I look forward to what future versions of the Pathfinder Adventure Card Game do, especially if they start going into some of the places that are as unique as the environment in Skull & Shackles! Hopefully a Bloodbound-themed Gothic mystery edition of PACG will get greenlit, with some of Schneider’s iconic characters—as well as their allies and enemies—as playable choices!