[Editor’s Note: Although we published the shorter version of our 2015 coverage of Gen Con on our facebook page last year, as this upcoming year’s Gen Con grows closer, we decided to publish the extended edition of our visit with even more images and info here. -JT]

While we have covered Gen Con since we started the magazine in 2012 (which I mistakenly told the good folks at Paizo started in 2013), prior to this year, we have done so with the help of writer, Julie Stratton. Julie has done a great job throughout the years, but has insisted that I needed to truly experience Gen Con for myself. So this year, while she covered the Con for our sister magazine, MicroFilmmaker Magazine, I covered it for DarkestGoth in person. As I’m an introvert, like many of our readers, I realized I could bring an interesting perspective by showing what a newcomer can expect in the tenth largest Con in the United States. This year, there were over 60,000 fans who attended, which is just behind Dragon Con’s 2014 numbers of 63,000. If PAX Prime is included, then Gen Con and Dragon Con are #10 and #9 in size, respectively. (If you restrict it to shows that stay in one location and don’t travel around like a Grateful Dead reunion tour, then they move up to #9 & #8.)

Before we get into the actual tour, lets mention a few interesting facts about the Con. “Gen Con” is short for “Geneva Convention” because it started out being held in Lake Geneva, WI and was started by TSR as a place for people to come and play the game they then owned, Dungeons & Dragons. Later, a small startup roleplaying company called Wizards of the Coast, from Seattle, Washington, would hit it big with a trading card game called Magic: the Gathering, allowing its CEO, Peter Adkinson, to buy TSR and, with it, Gen Con. Later, when Adkinson sold Wizards to Hasbro, he would purchase Gen Con and, soon after, moved it to Indianapolis, IN, due to its central location in the United States. (It’s surprising how many Americans can drive their in under a day.) It’s still known as “Gen Con Indy” in all the signage because there have been smaller spin off Gen Cons in other areas and even other countries, but the core event takes place in Indianapolis.

Over 500 press organizations covered the event this year, which is the largest amount that have been on hand to date, and it was cool to be part of a group of people so eager to learn more about games.

And while there are tons of vendors in one of the huge spaces in the Convention Center, there is an equally large space for game playing, testing, and tournaments. So anytime you felt overwhelmed by the crush of things in the vendor area, you could take your Magic cards to the play area and likely find someone to play against! (A lot of new products were also being unveiled for test playthroughs in this hall.)

With that said, here were just some of the highlights of the show…

The massive gaming room is a huge part of Gen Con.

As I had a 2 pm interview scheduled with one of the game companies, I decided to go into the game playing hall before moving on to the exhibitor area.

At the front of the area, they had some giant versions of some cool Star Trek games. As you went further in, you found people playing D&D and a slew of other RPGs. Some folks played magic while waiting for a larger group to form, while further in, you found indie game producers demoing games. 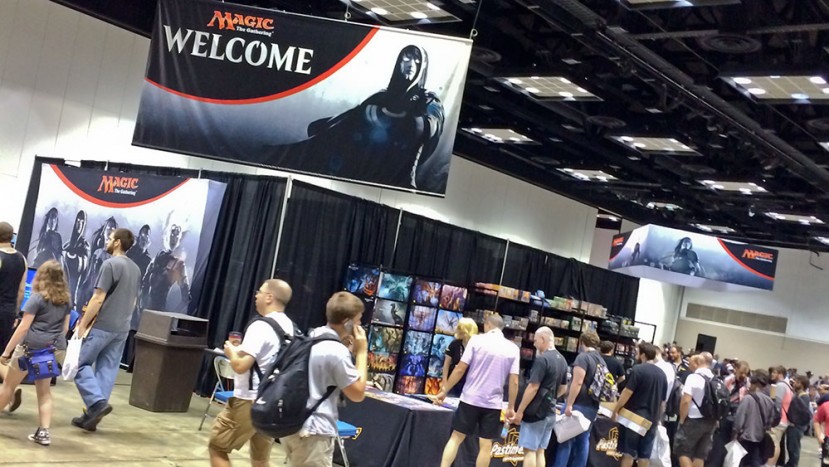 Midway through my exploration, I ran into Cutthroat Kingdoms–a new Indie game being developed by Bryan Merlonghi. Think an alternative fantasy take on the espionage found in the novel/show series’ like Game of Thrones. I had a chance to sit down and chat with Bryan–a professional model maker and painter turned game designer from California–about the new game, what it’s like to develop games in the indie world, and how the indie game industry supports one another. (We’ll cover that interview in our post-Gen Con article on the Indie Game industry and resources for that community.)

Then I got a chance to play the game with the designer and two regular RPG players, which was a lot of fun. Very Machiavellian and macabre, with intrigue coming from weddings, assassinations, alliances, kidnapping bastards, and control of plagues!

They’re still tweaking the mechanics to streamline the play length, as the game runs a little long for new players, but it does a really great job of making you reenact feudal kingdom politics with an emphasis on human interaction. (And the human interaction is pretty natural, even for introverts.)

The game is looking to cement a deal with a distributor at Gen Con, as its seen a lot of interest over the past few months and Gen Con is the biggest convention for board games in the United States. If that doesn’t materialize, they’ll be going the Kickstarter route and giving some really cool props and hand built game boards at different tier levels to contributors! (In fact, because of Bryan’s background in model building and set construction, even if traditional distribution is cemented, he’d like to do a few expansions via kickstarter as a great way to let fans choose how the game expands AND so they can get great props to use in their home games!)

If you’re interested in checking out the game, go to: www.cutthroatkingdoms.com

Hopefully we’ll get a chance to officially review the finalized version of the game when its released! Battlekasters opens up a creative new way to explore conferences and media.

Had a chance to meet with Alane Adams of BattleKasters. Alane is an example of the sort of transmedia storytellers we enjoy featuring at DarkestGoth.

After writing her fantasy novels, she decided to create an interactive game that would bring the novels to life at conventions and locations by using GPS technology to mark different places you have to go to earn cards to play spells. Her desire was to bring media-addicted children like her own son into the fold of reading.

The concept is great, although the implementation is a bit limited as an actual game, since its deployed at individual locations of different cons. In that regard, its a clever form of marketing that gives people something to talk about and encourages them to check out the Red Sun, the next in her book series, Legends of Orkney, which has been described as “Percy Jackson meets Norse mythology.”

Its capacity as a game is limited for the same reason its clever marketing: because its constrained to specific locations. If they they chained the GPS centric ability to geo-locators like FourSquare, such as we’ve seen done in zombie games like “Please Stay Calm,” it could become an ARG game that could deliver additional content and meta-secrets for the book and the universe its set in, like windows into a parallel world .

If you’d like to see more about Alane Adams, her Orkney series, or BattleKasters, go to http://alaneadams.com/ The Dungeons & Dragons Entrance to the Gaming Hall. We had the chance to interview Jeremy Crawford, managing editor of Dungeons & Dragons.

While Crawford wasn’t able to tell a huge amount about future D&D releases beyond the upcoming Sword Coast Adventurer’s Guide, he did make it abundantly clear that he and co-designer Mike Mearls were electing not to do panels or even have a booth at Gen Con because their emphasis this year was about gameplay. Especially since Gen Con is and always has been about PLAYING games, rather than just talking about them. (Which brings the product line full circle, as Gen Con was started in Lake Geneva, Wisconsin by TSR largely for players of Dungeons & Dragons to play together in one spot. Regardless of changes in location for the con or ownership of the franchise, D&D is going back to where it all started.)

Players this year get to play new campaigns from the Rage of Demons set and have really enjoyed the changes that the fifth edition rules have permitted both for this expansion, but also the simplicity they’ve created for retconning older modules!

Additionally, fans have a chance to chat with Crawford & Mearls at an informal session called Ask the Sages each of the first three days from 3-4 pm, which is a really cool level of direct interaction with the fan base.

As we talked with Crawford, the thing that was abundantly clear was just how much of a fan he was of D&D and how much it excited him to be helping make the game he loved since childhood. In this regard, he reminded me much of director JJ Abrams in regards to Star Wars VII and lead designer Mark Rosewater in regards to Wizards’ other huge property, Magic the Gathering.

He emphasized the fact that D&D will heavily emphasize the many planes of their multiverse now and in the future, with DM’s (dungeon masters) being easily able to set their campaigns throughout. (There was no confirmation on whether the planes of D&D might be in a shared universe with the planes of Magic the Gathering, but he did say that they have so much content within D&D that they wouldn’t “need” to go elsewhere.)

Crawford also went on to state that while there was no official news about a possible D&D movie at this time, he did say that there would be an announcement surrounding such a film “soon.” (He also would not confirm whether Wizards might be considering taking a page from some other content creators’ books and forming a film studio division, considering the highly anticipated Magic: the Gathering movie is already in the development pipeline.)

To find out more about D&D and its presence at Gen Con, go to: http://dnd.wizards.com/articles/news/Gen Con2015 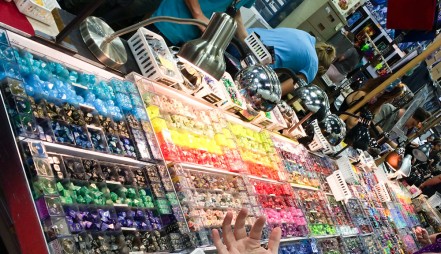 Amongst the other things being sold at Gen Con are lots and lots of dice. 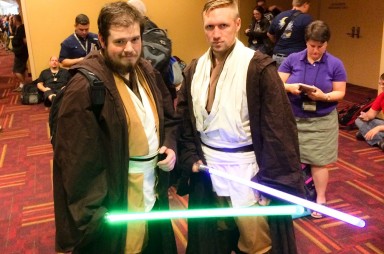 The Cosplay explorations at Gen Con included these great Jedi.