[Editor’s Note: To read all of our Gen Con 2015 Walkthrough, start with our Prologue & Thursday, Day 1, or go back to our middle article, Friday, Day 2. -JH] In addition to the great booths inside Gen Con, there are a ton of great food trucks outside Gen Con!

After misjudging the best way to enter the vendor area the day before, I corrected my approach, skirted the convention center, and came in the opposite entrance, allowing me to make my way through the even more crowded vendor area with a minimum of “pardon me”/”excuse me” dances in the process.

Arriving in Paizo‘s Pathfinder pavilion was really cool, because it shows how just much a creative indie manufacturer could become a major power player with its Roleplaying system in just 7 years. It may have been based on D&D’s 3.5 open license mechanics when it was released in 2008, but it has steadily evolved since then, spinning off a catalog of expansions, classes, maps, and figurines, to say nothing of the card game that debuted in 2013–which has been doing great business ever since. Although the overview of Paizo may sound a lot like fellow Washingtonians’ Wizards of the Coast–who were also inspired by D&D and started out making rpg expansions–their mindset toward their gameworlds is decidedly different. For example, the Pathfinder card game is a community, co-op based game designed to reflect the paper and pen version (rather than a head-to-head battle game like Magic: the Gathering, which has no similarity to Wizards’ D&D) and all of Paizos realms are designed to be one shared universe (unlike the two distinctly separate, multiplane multiverses found in D&D and Magic: the Gathering).

I had a chance to chat with Paizo’s editor-in-chief, Wesley Schneider. Schneider was a real kindred spirit who very much understood our community, along with our understanding that the world is not limited to pure science. It was great fun to chat with him about the new content they’re releasing and the different places that Pathfinder is going in the near future.

One thing that Schneider brought up was the care they’d gone through to be respectful to occult practitioners through this expansion, enlisting the aid of many leaders in the field to craft the book and its rules. Additionally, he brought up the hard work that had been done to make sure that existing Pathfinder players could use this expansion easily with their current magic using characters and their pre-existing stats, so that they get the flavor and feel of the expansion, without having to learn a completely new way to play!

Additionally, Pathfinder will be releasing the new Pathfinder Tales book, Bloodbound, from fantasy publisher Tor. A dark noir spy tale, Bloodbound marks the novellic debut of Schneider as an author. (Schneider has written a lot in other facets of the Pathfinder canon, obviously, but this is his first novel.) You can read our review of Bloodbound here.

To learn more about Paizo and Pathfinder, go to: http://www.paizo.com

With our readership, he also clued us in on checking out a new indie game called Kingdom Death, which looks at a dystopian alternate world where you must survive against overwhelming odds and powerful monsters. I had a chance to chat with Adam Poots, the creator of Kingdom Death, at his booth at Gen Con. According to Poots, the gothic flavored game raised $2 million through its 2013 kickstarter, as well as preorders, reaching stretch goals that permitted him to add a lot of high quality art and flare to the game. Finding a high quality manufacturer in China took longer than expected, but the game is starting to ship to backers now and he’s taking preorders at Gen Con.

The game looks at a heavily dystopian future that’s been described as some as “establishing human culture in Hell,” and I would agree with that. The game is beautiful in a Gothic, Dante’s Inferno sort of way. Due to its high production cost, for those who didn’t support the Kickstarter and who weren’t at Gen Con (where it was given a discount), it has a retail base price of $400. Currently there are no plans on a more basic introduction to the game with a lower price tag, with creator Poots indicating that making a more basic version would be watering down the essence of what the game is. To learn more, go to: www.kingdomdeath.com

I had the pleasure of sitting down with Cryptozoic’s Vice President of Creative, Adam Sblendorio. Cryptozoic is one of the better known Indie game houses to explore licensed IP (intellectual property) in their games. They’ve been responsible for the trading card game versions of The Lord of the Rings and DC Heroes, as well as original creations like Epic Spell Wars of The Battle Wizards: Duel at Mt. Skullzfyre (which was recently featured on Wil Wheaton’s Tabletop). 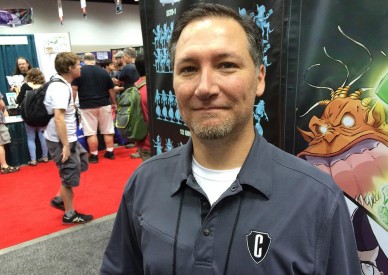 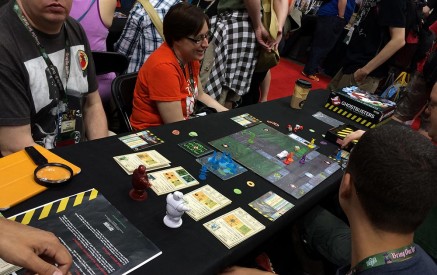 To learn more about Cryptozoic and their upcoming games, go to: www.cryptozoic.com

To read more of our conversation that we had with CryptoZoic, check out our article here about that. 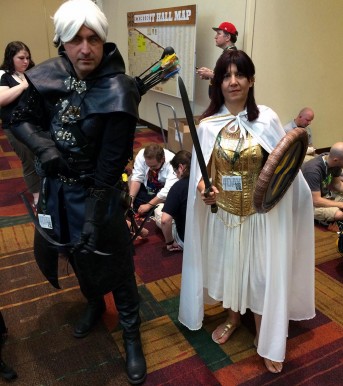 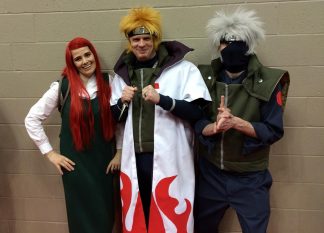 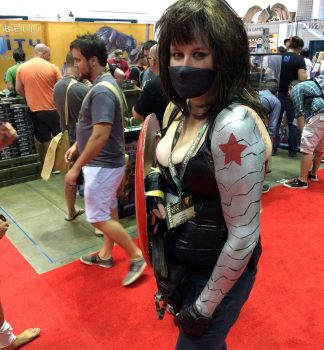 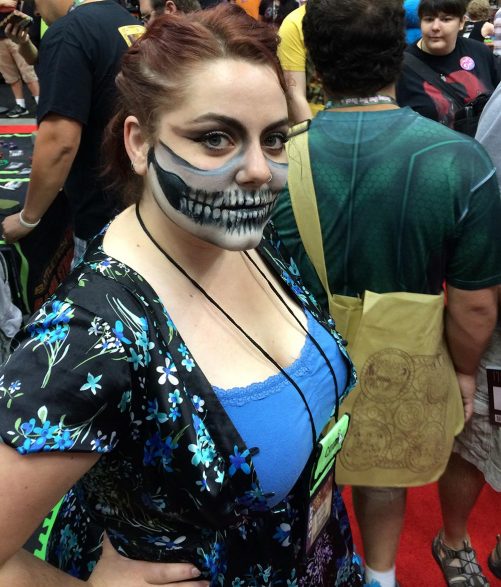 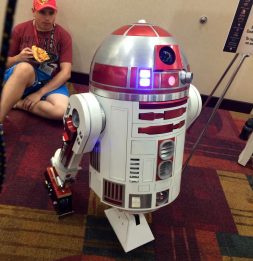 No idea if this is one of the home built R2D2s that LucasFilm is featuring in upcoming films, but it was really awesome to stumble upon!

The film festival at Gen Con has grown more and more each year, including fantasy movies like The Throbbit.

So, as an introvert who has a serious threshold limit for being around a ton of people (and human claustrophobia in crowds), how did I find Gen Con? Surprisingly refreshing and enjoyable.

While you do want to make sure you bring a backpack with things you’ll need throughout the day with you (and I normally departed by around 4 PM or so), I found the fans who showed up very cool, the costumes very colorful, the panels and speakers very genuine and enjoyable, other attenders (or vendors) very willing to chat (or be photographed), and a spirit of fun emanating throughout the event that made me begin plotting how I could get all my friends to attend next year! If you’re wanting a cool place to go to let your game freak flag fly, you’d be hard pressed to find a bigger bang for your buck than Gen Con!

Continue to check back with DarkestGoth
as we break Gen Con 2016 later this year!