At long last, we finish the quadrology of Inkle Studio’s reimaginings of the Fighting Fantasy gamebooks, Sorcery! (If you’re just now discovering our reviews of this series, read our prior reviews of Sorcery!  , Sorcery! 2 , and Sorcery! 3 .)

In concluding the last game, The Seven Serpents, we made our way through the treacherous time-warped Baklands, tracking 7 deadly serpents who were tasked with hunting us down and slaughtering us, or, at the very least, warning our nemesis, the Archmage, of our approach so we could not assault Mapang unawares.

In the final chapter, we find ourselves outside the metropolis of Mapang—home to the deadly keep where the Archmage who has taken the stolen crown has fled—seeking to enter his stronghold, vanquish him, and reclaim the powerful Crown of Kings for the people of Analand! But will we be able to overcome the treacherous magics which linger in this cursed city, tearing the control of our destinies from our grasp?

The presentation of Sorcery! 4 (S!4) continues to stay very consistent with the series to date, including actual drawings from the original books when available, pen-and-ink illustrations during battles, hidden dice roles to determine combat seamlessly, and an interactive map to drag your character across. Additionally, the improved rewind system that was unveiled in Sorcery! 3 is in play, making it much easier to backtrack (although still lacking the REDO command if you go to far back).

However, to add a new wrinkle to the presentation is a story development that “fries” the rewind engine for 2/3rds of the game, forcing you to commit much more to your choices. (Fortunately, as we explain later in Gameplay, this isn’t as big a negative as it would first appear—but definitely changes how you interact with the game, which is appropriate for the FINAL chapter.)

One nice, small addition in this area is the inclusion of multiple costumes as an interactive component that both change the gameplay and the appearance of your avatar. While it’s a minor game changer, it adds some nice presentational flavor and serves a legitimate purpose from an RPG standpoint.

As with all good RPGs, your decisions in past chapters of the game will impact the options that are presented to you in this final chapter—especially if you didn’t destroy all the serpents in the last chapter on your way through the Baklands. (The difference between playing as a character who’d missed a serpent and one who caught all of them was the difference between playing as a known fugitive and that of a legendary myth; a nicely subtle but formative difference that enhanced the feeling of repercussions.)

Sorcery! 4 continues the tradition of looking and performing great. Throughout my testing with multiple accounts and scenarios, it has proven continuously stable whether you kill the game, minimize it to check email, or get interrupted by phone calls. This really needs to be emphasized, because I can’t tell you how many amazing games fail when it comes to living on a phone because they’re unstable in one of these areas, so it continues to be great to see how well Inkle does these things! (To give you a real world example. I play two other popular iOS games–Mortal Kombat X and Injustice Gods Among Us—which can crash once or twice a day, often losing valuable progress you’ve made on certain challenges, or, even more often, lose audio if you’re interrupted by a phone call or even an alarm. Sorcery! 4, on the other hand, crashed only twice in the entire time I was testing it—and then it had saved close enough to the crash to make the reboot almost painless—and didn’t screw up the audio or music no matter what interrupted it.) 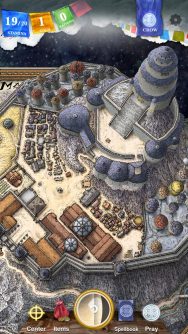 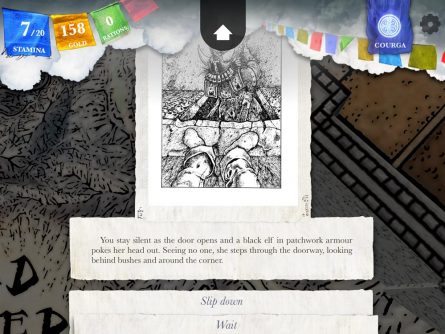 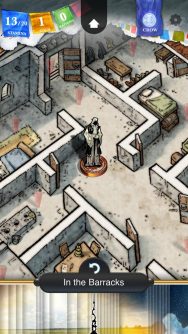 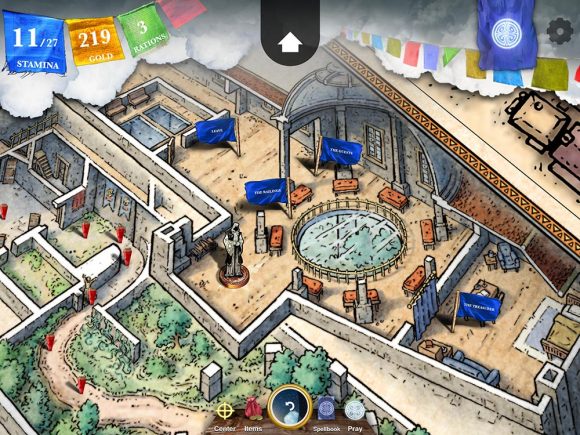 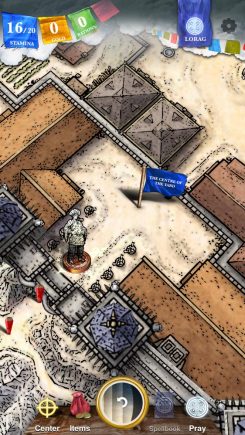 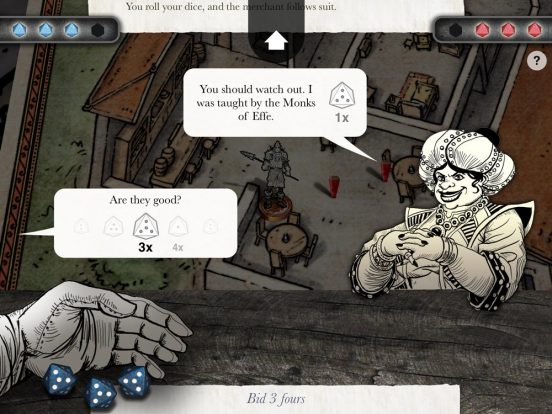 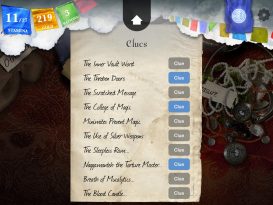 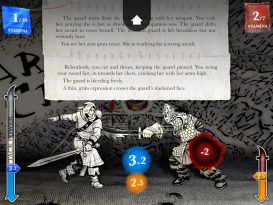 In the previous chapter, Inkle refined the mini-game of Swindlestones into Mindstones, improving their impact on the game dramatically, and introduced a controllable version of time travel via beacon devices. This allowed you to essentially interact with alternate versions of things in ways that reminded me of the old Playstation classic Soul Reaver, which permitted you to go into a spectral version of reality somewhat like Netflix’ Stranger Things’ “Upside Down.” This temporal interaction was a nice twist to a game series that’s managed to give us a cool new wrinkle to each chapter.

In this new addition, the main trick is in the form of removing an ability that you’ve come to overly rely on: the ability to UNDO your decisions. Through some clever revelation, you come to realize that it’s in fact been the intercession of an unknown god which has permitted you to rewind time; unfortunately, the mystic properties of Mapang prevent this god’s intercession from the time you enter the city, so all of your decisions will now be permanent.

While this does feel a bit terrifying in one way, they’ve gotten better about encouraging you to not overthink things (which can cause some to stop playing the game until they can play it perfect) by having some pretty blatant prophecies explain that you can’t succeed in your mission except THROUGH death. And the creators have managed to include enough checks and balances to how this fate/death/rebirth system works for you to find it intelligently challenging–more of a metaphysical growing process—rather than frustrating.

This allows the creators to explore some new spell processes, not only through introducing a few more spells, but also by expanding the counterspell concept that was introduced in previous chapters—with the intelligent use of counterspells being extremely important to numerous mini-games and full-fledged missions. (Just be aware that, unless you discover a person or item that explains the use of a spell as a specific counterspell, it’s only through using spells in different situations that you’ll uncover certain spells’ counterspell ability. This can be a little nerve wracking when it comes to using spells that require you to use items to accomplish them—but, fortunately, the game makers often lower the number of spell possibilities in areas that require item-specific counterspells.)

And, as we would hope in the final chapter of this epic quest, there are plenty of places and areas that will let you use cool things that you collected in previous chapters, including those Borinskin Boots you so cleverly discovered in Chapter 1 and have just been hanging on to ever since! Having a chance to look through not only my own saved games, but also a plethora of saved games that the developers generated for product testing, really helped me appreciate just how complex and unique a journey each character can have in this epic four game series! (The finale, especially, manages to use not only things but information and game mechanics that were foreshadowed in the first book, which is a really nicely holistic touch.)

And if that weren’t enough, you even get to unlock an expanded version of the game after you beat it.

It really is hard to believe that you can pack along this compelling an RPG in a mobile device!

As we’ve explored the Gothic tendencies toward a dark romanticism (that works well with ultimate good vs. evil quests and righting the wrongs of a damaged world), spiritual/supernatural perspective (that appreciates the nuance of deity, specter, and other metaphysical concepts), and a flair for traditionally nerdy pastimes (like paper and pen RPGs), the Sorcery series fills all of these boxes in spades.

The fact that it tells a genuinely interesting and compelling tale as well as sports an ending that has almost as many nuanced options as something like the gold standard of digital RPGs, Knights of the Old Republic, makes it a no brainer for any of our readers to pick up and thoroughly enjoy sinking their leisure hours into.

There’s a certain sadness that comes when writing the closing thoughts for a game series that’s spanned more release years than the Lord of the Rings films, but there’s also a satisfaction that comes in playing through a game that finishes even stronger than it started, without failing to push boundaries and try new things along the way. The fact that, much like the film adaptation of Fight Club, the creatives at Inkle were able to more fully realize the author’s vision in a truly new medium is awesome! Fortunately, the fact that this series has now been adapted beyond iOS not only to Android, but also for PC and Mac, means that many more players will get a chance to fall in love with this great series!