It feels funny calling it that, when only last year I brought you an article as my experience as a Gencon virgin. That’s one of the magical things about Gencon, the moment you get there, you feel a sense of kinship, of belonging. Let’s get this show on the road!

The air buzzes with geekery and fandom, and you feel home. This was my second Gencon, so this year I began to explore Gencon more in depth, with events and gaming.

I also had the pleasure of sacrificing–er, “bringing”–a new Gen Con virgin in the form of fellow alt model (and my best friend), Kitty Hagen.

At more than 70,000 attendees, Gencon is easily the largest con we attend. The first day we explored, taking in the sights. The Indiana Convention Center was massive (I still don’t think we saw everything), and everywhere we turned there was amazing cosplay or a cool new booth. We got to the vendor hall, and Kitty was stunned.

Watching her try to comprehend the sheer scope of the place, between the milling crowds and aisles stretching literally as far as the eye could see, was hilarious, knowing I’d been in her shoes only the year before. I hadn’t prepared her for the size of Gencon beyond telling her it was big. I knew it wouldn’t really compute anyway, and seeing her excitement was a true delight. Some of the crowds at Gencon

Our big event for Thursday was a Live Action Role Play, or LARP. Larping is a fun mix of roleplaying and taking your cosplay to the next level. Our LARP was a Fae based masquerade ball. Kitty was cast as a banshee who had befriended a group of humans, trying to keep them safe in the unpredictable land of Fae, many of whom saw humans as a tasty snack. I was cast as the queen on the Unsidhe, in whose honor a masquerade was being thrown. Kitty got to lead her band of merry humans on an action packed adventure, while I dealt with the intrigue and machinations of court politics. Kitty overwhelmingly succeeded her goals, keeping her humans safe and retrieving a special item hidden away, while an evil mage turned me mortal and cast me into the realm of humans!

On Friday we really got the ball rolling! Kitty and I cosplayed as Chel and Miguel from Road to El Dorado, and it was an instant hit. That’s part of the best part of cosplay, seeing people’s excitement at a favorite character or movie brought to life right before their eyes. It was definitely the biggest cosplay success of the con!

Our big event of the day was attending a live recording of a podcast, put on by local Indianapolis based, “The Critshow”. They’re what’s known as an actual play podcast, where participants play tabletop games from different systems. They’ve chosen to do something called Monster of the Week. It’s a rules light/ story heavy form of gameplay that really lends itself well to podcasting. It moves quickly and always keeps the audience entertained. It doesn’t hurt that the cast is quite apt at delivering one liners that keep you laughing along with them! 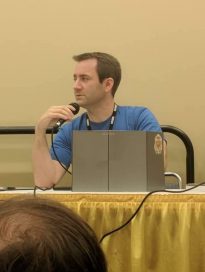 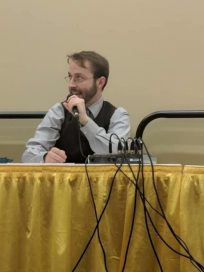 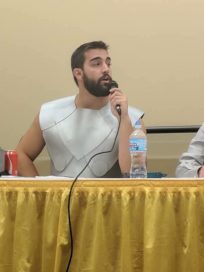 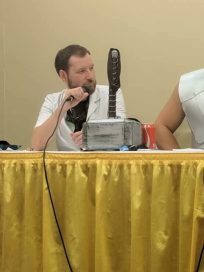 And Teej, playing ‘The Mundane’

After the recording I actually got the chance to interview the cast. (Stay tuned for that in a separate article!), where I got the chance to learn a little bit about how putting together a podcast works, and how the cast members, Tass, Teej, Jake, and GM Revington work together and their thoughts on their weekly show.

Saturday we actually got a chance to play a little Monster of the Week! Each cast member GMed a game for people who wanted to give it a try, either because they were fans of the show or curious about or liked the format. Kitty and I were assigned to Revington, and we had a blast. Finishing Monster of the Week!

Kitty rolled up a powerful werecat, capable of (and did!) breaking through walls like some sort of feral Kool-Aid man. I was a human class known as the Professional who focused on firearms and protecting others. Together we teamed up with a couple other players to find a ghost at a metal factory and put her spirit to rest.

Then it was off to the annual Costume Contest! The participants, as always were a class all their own. Some of the characters looked like they’d stepped right off the page, or right out of the TV or videogame. It’s always awe inspiring to see what the cosplay community can do with characters and mere components. 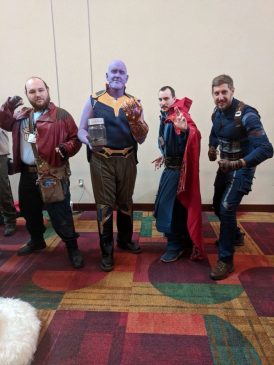 An example of the amazing cosplay we got to see everywhere. 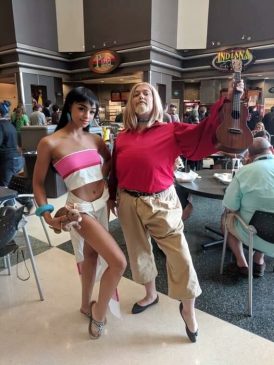 Chel and Miguel are getting the hang of this ‘Gencon’ thing! 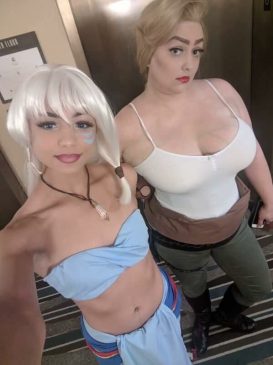 Kida and Helga are ready to wrap up Gencon with a bang!

One particular cosplayer among the crowd caught my eye due to her unique and macabre style. I got to interview her on Sunday, and I thought you guys would love to meet this new cosplayer! Her name’s Elizabeth (Instagram @imprisoned.dreams). She’s only fifteen, but she’s already got an incredible start into the world of cosplay. This is her second Gencon and fourth cosplay already, and she hails from Dayton Ohio. Elizabeth showing of some of that spectacular makeup

One of her favorite parts of Gencon and conventions she finds, is she “loves the environment, all these different types of people just being themselves, it’s awesome, and I just love it.”

She says this cosplay is her favorite that she’s done so far, due to the amount of handcrafting and work she’s put into it. She would call the wolf head the most work, as the final variation of it took over four hours to craft, and took several tries.

It took her over three hours to apply this makeup, she had to wake up at 4:30 in the morning in order to prepare. Elizabeth’s been practicing SPX makeup for about four years now, as she originally got her start and love for gore and cosplay from watching the Walking Dead, which was a big inspiration for her.

She’s been working on this concept of the gory Red Riding Hood for a while. She says she first came up with the idea a couple of years ago. And what’s a Twisted Hood without her granny and wolf head?

“I’m a big fan of horror and special effects makeup, so she decided to try this sort of “Twisted” Red Riding Hood. In this case, she has her Granny’s head cut off, because she loses her mind a little bit, and then goes on to eventually hunt the wolf.”

Elizabeth has big plans for the future, her next cosplay lineup includes Xayah from League of Legends, Nevermore Reaper from Overwatch and Slyvanas Windrunner from World of Warcraft. She’d love to turn her geekery into a career one day, with a dream job in art or animation, or maybe even special effects makeup.

So, that was our Gencon! We had an amazing time trying to see and do everything (We’ll never succeed), and are already planning and saving for next year! The first Gencon you go to tends to immediately become the start to a new tradition, and it’s one neither of us plan on breaking anytime soon. We’ll see you next year!