Con season is upon us! The roar of the crowd, the delight of a well-constructed cosplay, the giddy rush of panels and contests, all combine for the exhilarating con weekend that lives on in legend. C2E2 is one of the primere Midwest conventions. Standing for Chicago Comic & Entertainment Expo, C2E2 boasted attendance of around 80,000 people last year. This year, for the first time, model and best friend Kitty Hagen and I, Amaranth Cosplay, ventured to Chicago to explore C2E2! Day one, I braved the crowds debuting my new Bowsette cosplay. I focused my time on the Vendor’s Hall today, taking in all the sights and cosplays. The Hall impressed me when I stepped onto the carpet past the ID checkers. It rivaled my experience at Gencon, something I didn’t know would be possible outside of coastal big leagues like SDCC (San Diego Comic Con). Rows and rows of stalls greeted me, in a hall large enough you could (and I did!) get lost in. A stunning Mad Moxxi from Borderlands 2 was roaming around the event.

Here, you could find almost anything geek related. From an inflatable Jabba the Hut, to adorable variously costumed Eevees in pillow form, swords, mounted dragon’s heads, to an artist’s alley were you could watch them at their trade. They even had a cosplay section! It boasted an emergency cosplay triage stand, lectures on various aspects of cosplay, and various backgrounds you could pose in front of.

As always, the vibe you get from these conventions is always so welcoming. There’s just something amazing being in a crowd of people, and knowing they’re your people. You could walk up to anyone there and start some conversation about various geekery. Smiles and compliments abound, whether it’s a particularly well done cosplay, or an excellent piece of geek swag they managed to obtain. Cons are where you meet the family you never knew you had, and C2E2 is no exception. Day two, I hit the hall in my flagship Dr. Mrs. The Monarch cosplay. During the day, I attended my very first panel! It was about a show I have a wee bit of an obsession with, The Blacklist. It’s about a world class criminal who turns himself into the FBI in order to work with them to capture criminals the FBI may not even realize exist. His only catch? He will only work with a specific profiler, and it’s her first day on the job. The panel was amazing to me. I got a chance to see some of the actors from the show, and really get a look behind the scenes at the show and who the actors themselves are. I got to learn things from their theories about their characters, to what superhero the actor would like to be.

For me, the biggest draw of the day was the Crown Champions of Cosplay. Every con has some sort of cosplay contest, so at first I didn’t realize what a big deal this one was! The level of craftsmanship that went into each and every cosplay I saw on that stage was simply mind boggling. The three main categories were Armor, Needlework, and SFX. Contestants decided where their costume best fit, and winners were swiftly chosen. Then, from all entrants, they selected the overall winner of C2E2. The winner of C2E2 was declared as Ginoza Costuming with an amazing troll from World of Warcraft Cosplay.

Little did I know that was only the first step. Select cons around the United States submitted a champion from their region, all travelling to C2E2 for a chance to represent the United States! These were the best of the best, from all across the country. The judges then had to select a winner for this region. Cowbutt Crunchies Cosplay received that honor, with a simply STUNNING Demon Lord Helgasercle. Immediately after Cowbutt Crunchies was declared the regional winner, she faced off against all the regional champions, to determine who would be considered the best in the States. She won once again, sweeping the USA in a resounding victory.

You’d think that would be enough for one competition. Not C2E2. Not only did we get a chance to see the champion for the USA crowned, the Championships also were international. Champions from all over the world came to compete. We saw champions from Korea, India, Britain, Australia, Singapore, and more! Now Cowbutt Crunchies Cosplay faced off against the best cosplayers in the entire world. The sheer talent that was on that stage took my breath away. It is only a dream of mine to one day be able to hold a candle to the scope of what I saw that day.

Finally, the judges reached a decision. From around the whole world, the best of the best, the winner, the Crown Champion of Cosplay, was crowned. Cowbutt Crunchies did it again! In the span of an hour, she had gone from contest hopeful, to con and regional champion, to national champion, to now, world Champion. 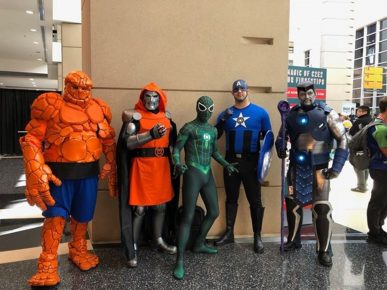 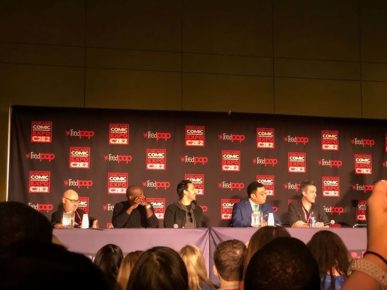 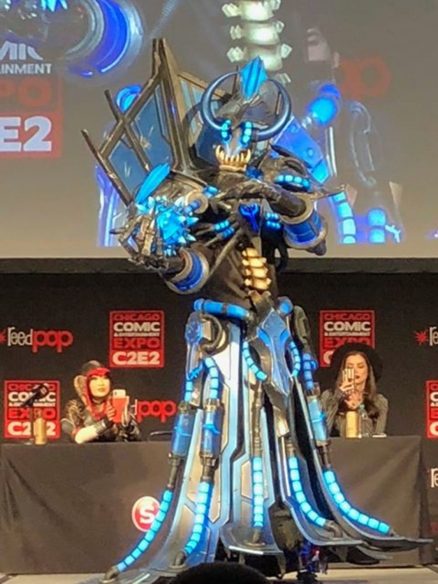 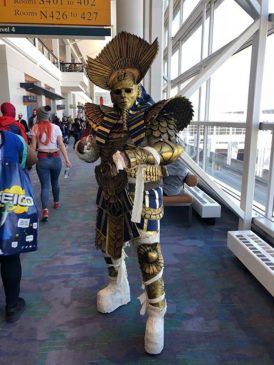 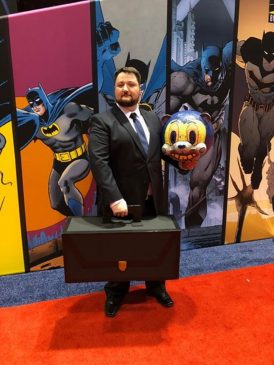 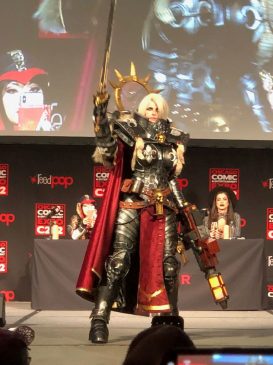 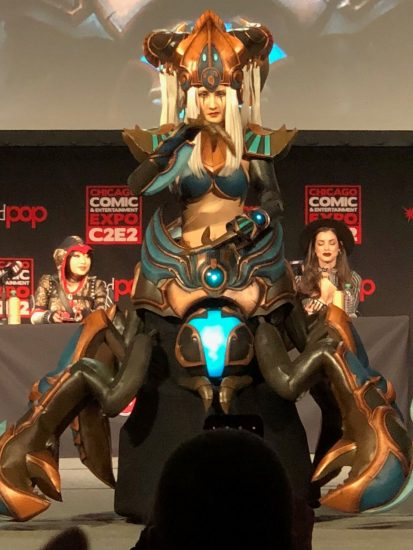 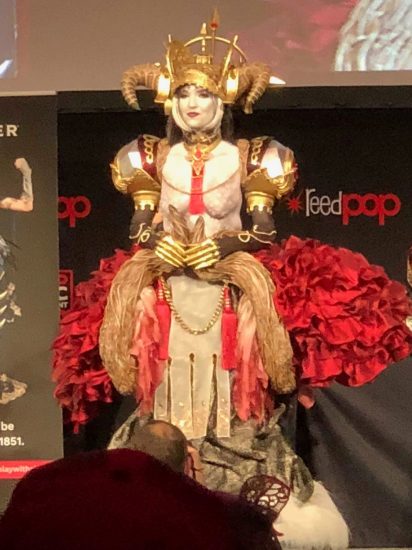 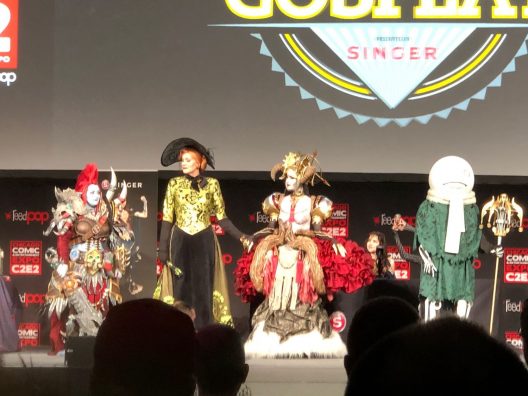 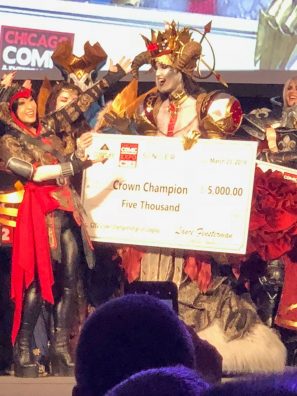 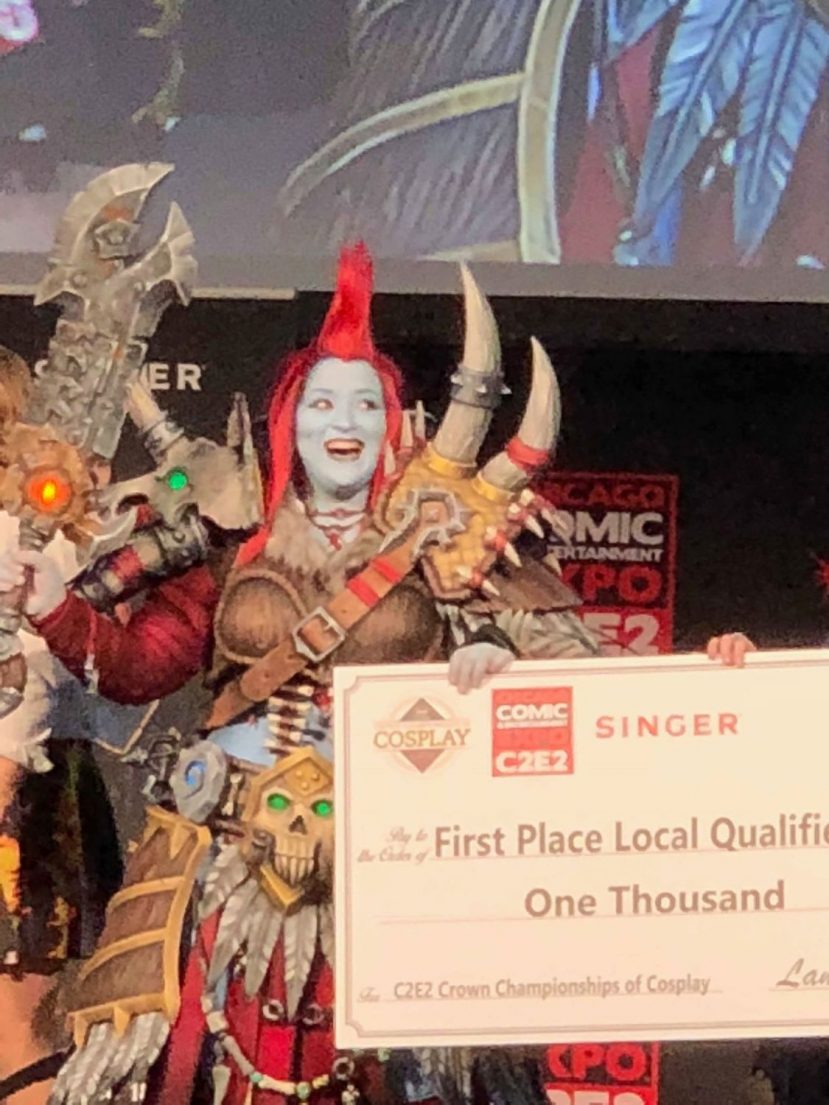 Me cosplaying as Pam Poovey from Archer.

Witnessing that is probably the closest I’ll ever come in my life to seeing a fairy tale come true. No one could say she didn’t deserve it. The sheer intricacies of every detail were jaw dropping, combining just about every crafting method known to man.

With the biggest draw of the con having come to a close, day three was a relaxing day for me. I got to debut a new cosplay, Pam Poovey from Archer. It was a blast cosplaying something I could be comfortable in, and watching people geek out about recognizing her and the details of my costume, all the way down to my back “tattoo”. In the end, it was a perfect reminder for me that it’s not always about how flashy or intricate a costume is. It’s about making people happy; watching them light up and enjoy a favorite character come to life. That’s what cosplay’s about.

(Photography by Amaranth and Kitty Hagen.)