It is said that blood is thicker than water. Vampire risen Barnabas Collins returns to his family roots. The wealthy Collins family cursed by a vengeful witch, who’s failing family fishing business is in dire need of restoration, is the quest for justice. In this Tim Burton picturesque cinematic film, the saga continues.

From Liverpool England the Collins family moves to the United States and start a fishing business. They establish an entire seaport town named Collinsport. Barnabas Collins is just a child at this time. As Barnabas grows into a young man he has an affair with a witch named Angelique. She vows for his love however he does not feel the same. Angelique is a control freak and casts a curse on the Collins family since she cannot get her way with Barnabas. The evil curse kills the Collins mother and father and binds Barnabas to a dark chained world of the undead. He then becomes obsessed with dark magic yet finds a glimpse of light in his one true love Josette who also falls victim of Angelique’s curse. A hundred and ninety seven years later, as vampire risen, the culture shock begins. Barnabas makes his way down the paved road towards McDonald’s golden arches, stunned by an illuminated manuscript “M” letter he recognizes from an ancient occult book about Mephistopheles.  He thinks the devil himself has risen and has come to join forces with him. As the headlights of a red racer approach you catch a glimpse of Jon Lord organ from Deep Purple’s “Highway Star” blaring from the car stereo.  Hr thinks that the headlights approaching are the devil’s eyes shining in bright Luciferian light. As he continues on into town, he discovers a vinyl records/ pawn shop. Across the street, “Superfly” is now playing at “The Roxy” theater welcoming him into 1972. As he makes his way to the front door of the Collinwood estate, the three questions lurking are “How is he going to explain himself after all of those years buried underground?”,  “How do you remove a family curse?”… and “Will there ever be a happily ever after?

Presented in exceptional Tim Burton style Gothic cinematography, the set designs are phenomenally executed. With scenes of a roaring ocean splashing amongst the rocky cliffs, an old Maine seaport village with ships reminiscent of a haunted pirates’ village, an architecturally extraordinary Gothic family mansion of fine detail, and an old fashioned vampire burial in the form of a woodland witch hunt are only some of the highlights of this masterpiece. The story transports to 1972 where peace and free loving hippies in VW vans and rock n’ roll are the trending scenario. A scenic fall Amtrak cross country scene opens with “Nights in White Satin” by the Moody Blues as it takes you to the Collinwood Estate. Later Barnabas makes his way home as he traipses through a front yard pumpkin patch filled with enormous pumpkins and is greeted by a drunkard whom he makes his loyal servant. He arrives just in time for the Halloween season. At the dinner table “Season of the Witch” by Donovan is not the only seasoning used at the fireside family supper. 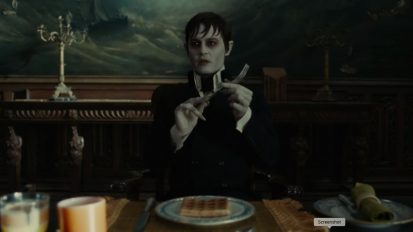 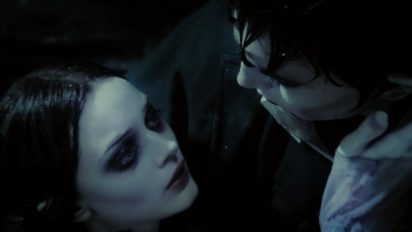 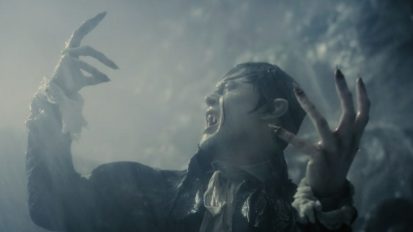 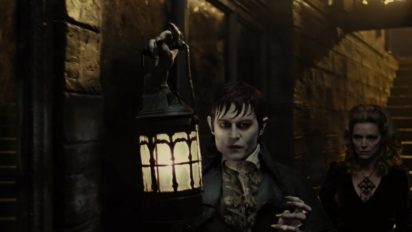 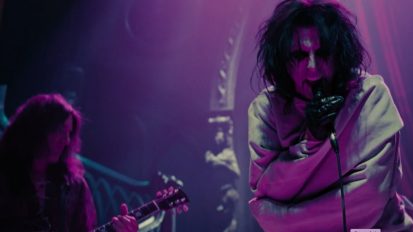 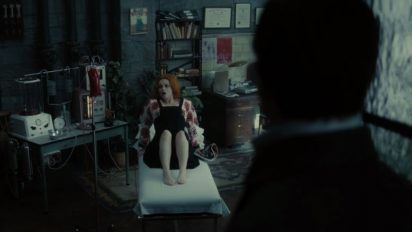 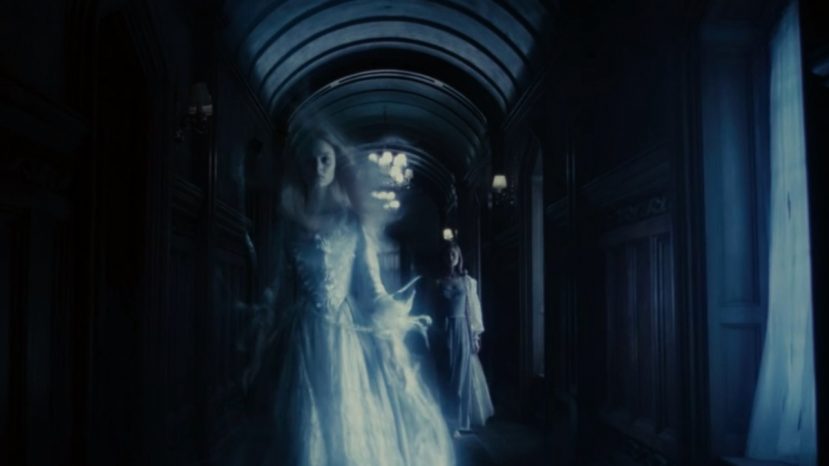 From haunted rooms, a witches curse, a vampire risen, to dark magic illuminated letter manuscripts read by candlelight, the term Goth comes to the forefront. With Alice Cooper, the master of theatrical Goth hard rock himself making a phantastic concert appearance in his straitjacket psychodrama thriller, “The Ballad of Dwight Fry”, the scene highlights an asylum ward flashback of a condemned mediumistic child who talks to ghosts. Alice Cooper also performs his hit song “No More Mr. Nice Guy” with a BDSM leather riding crop whip.  Alice’s Hollywood Vampire bandmate Johnny Depp stars in the leading role as Barnabas Collins.  As the legendary Dracula: Prince of Darkness, (who was yet another member of The Hollywood Vampires), actor Christopher Lee makes his maritime appearance in this iconic movie. Speaking of that Ozzy Osbourne, touted as the Prince of Darkness himself is also part of the soundtrack as singer for Black Sabbath on the song “Paranoid” which plays amongst the red lava lamp and bean bag chair in the teenage daughter’s room. Elton John’s “Crocodile Rock” adds a twist of southern Louisiana teenage sorcery to this small seaport town while T. Rex adds a touch of  Bang a Gong red vampiric top hat ambiance. Speaking of red, a fiery redheaded psychiatrist in search of eternal youth resides in the Collingwood estate and will go to any lengths in order to manifest her utmost desire.

David Bowie, vampire from The Hunger,  makes a small cameo appearance on a tour poster right when you walk into the teenage daughter, Carolyn’s room. Carolyn is a bit of a rocker brat and is enthralled with the music world. With tour posters plastered on the walls,  Iggy Pop brings in the raw bare skinned sweat.  In graciously Gothic understated attire Michelle Pfeiffer plays Elizabeth, the eloquent estate overseer.  Bella Heathcote plays a very demure and feminine governess role as AKA Victoria Winters, a name that she devised while traveling on the train that was inspired by a travel ad displayed right there in front of her on the interior wall of the train. The brother Roger Collins is a no good derelict that irresponsibly abandons his young son David, a charming ten year old of remarkable intellect. Angelique, who has now taken over the majority of the fishing business, is nothing more than an envious dictator with a spark of revenge on a power trip. She has a well defined split personality and her irritating demonic voice vacillates accordingly.  The music score comes from the mastermind of Danny Elfman, while Johnny Depp as Barnabas covers some spoken word lines in “ The Joker” by Steve Miller. Due to the 197 year time warp, Barnabas Collins is expectedly awkward in relating to the new world which adds a load of humor into the show. Given the refined architectural and costume aesthetics of the movie, along with the set terrain which overlooks huge rocky cliffs and raging seas amongst foggy skies, the feeling is downright eerie. Add in the storyline itself, great acting, along with some of the best musicians that actually shaped the Goth subculture, I would say that the Goth fit is as Goth as it gets.

Could you imagine the Goth community putting together a sort of Goth Renaissance Festival with concerts, fashion, and shoppes along this vein? I recently read an article sent over to me by Ray Luzier, drummer of Korn and there was a mention of this sort of thing as a perhaps we should…. Anyhow I responded with the Brilliant Moon Award antique hearse that I sent over to the editor of DarkestGoth. I thought they would make awesome displays and also merchandise booths. You could put the ads on one side and literally stack t-shirts and general merchandise on the other side. I’ve also designed an apothecary for this sort of thing. Just a little food for thought for the Goth community to consider. If we could band together, it could very well happen and “Hey why not? Let’s have some fun!’ We’ve been locked up in COVID-19 long enough now. Time to go out and enjoy life again! See you next time on “Scary Movie Night”.